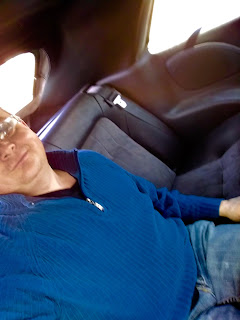 The library has been closed for over a month, though you can borrow items via curbside pick-up, so I've been spending a lot of time in the backseat of a car.  No, I'm not practicing for my post-pandemic career.  The car is parked in front of the library so I can access their wi-fi on my tablet.  I can download shows from streaming services to watch offline and blog from the backseat.  Oh, and I can also virtually keep in touch with other humans.  Thankfully, I've learned how to siphon mobile data from my phone to my tablet, so I can blog from home now.  I'll still sit in the backseat to download stuff because my data isn't unlimited.

Looking back at April, I've blogged way more than usual.  What I've discovered is that I prefer writing short subjects.  Whether it's stories or poems, I enjoy keeping my words concise.    Maybe I'm aiming my creative projects to those with short attention spans.  Well, at least I was in April.  Maybe I'll experience diarrhea of the mouth in May.

Another thing I've learned this month is how sometimes my half-blind eyes become so focused on one aspect that I fail to see the much bigger picture.  The moving image in the above video-poem was meant to represent one thing but it ended up looking like something completely different.  I didn't realize this until after I uploaded the video to You Tube.  I then laughed hysterically for a solid 5 minutes afterwards and now that something different is all I can see.

In conclusion, April has been a learning lesson, at least creatively speaking, but what about May?  My small town got its first official COVID-19 case near the end of April, (He Who Walks Behind The Rows failed us) and I don't know how this will alter my current version of normal.  All I do know is...

Whether I'm cramped up in the backseat or sprawled out at home, I'll try to keep my freak-light shining! 💡🤓 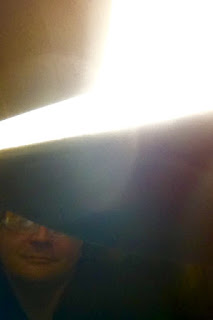 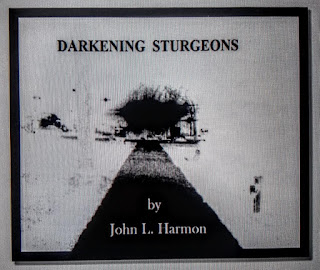 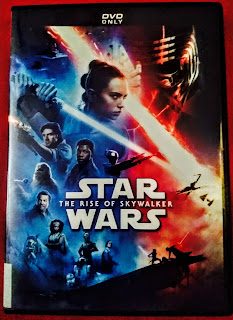 I am probably the stereotypical STAR WARS fan of a certain age.  THE EMPIRE STRIKES BACK is my favorite.  I hated Ewoks, well, until I saw Jar Jar Binks and the generally forgettable prequels.  Now the little fuzzballs from the moon of Endor seem like intelligent creatures to me.

I enjoyed THE FORCE AWAKENS, even with its similarity to A NEW HOPE, and embraced the possibilities of the next two films.  Those possibilities died with THE LAST JEDI.  Stupid humor surrounded the return of Luke Skywalker while Chewbacca was shamed for being a carnivore and then a painfully long detour to a Vegas planet, which was ultimately just an excuse to preach against rich people and alien horse racing, bored me to tears.  Disney should save its soapbox screenplays for its already tepid one-off STAR WARS films.

Then there is THE RISE OF SKYWALKER.  I have seen it twice, once in the theater and once on DVD.  I don't know how other fans feel, but I wanted something different than THE LAST JEDI, but I don't think I wanted a remake of RETURN OF THE JEDI.

The nostalgia is so amped up in THE RISE OF SKYWALKER that it makes THE FORCE AWAKENS seem like a fresh sci-fi romp.  The Emperor is alive and is still obsessed with conquering the galaxy.  This plot twist seemed to come out of nowhere and was done before in a comic book series. 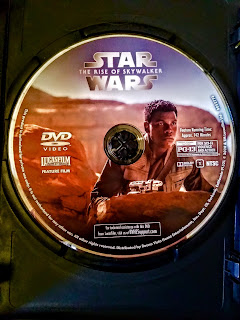 The action is non-stop, but feels slow as molasses, as our heroes valiantly pretend they have memorable character traits and actual chemistry together.  They go from one so-called action scene to the next on a scavenger hunt to find the key that will lead them to Emperor Palpatine.  C-3PO and Chewbacca make this plot detour tolerable.  Once again, the original trilogy characters shine like lightsabers in the underbelly of Cloud City.

Speaking of original characters, (CAUTION: possible SPOILERS in this paragraph) I once inquired to the whereabouts of Lando and Wedge.  Well, this film FINALLY gave me an answer and I was thrilled to see them again!   Now, I have another question.  Would THE RISE OF SKYWALKER have been a different, and perhaps better film if Carrie Fisher had been alive to fully reprise her iconic role of General (Princess) Leia?  Tragically, we will never know.  Sadly, the best scene in this film, only because it is the only emotionally authentic moment, is when Chewbacca reacts to the news of Leia's death.  His howl of pure agony still haunts me.

In conclusion, THE RISE OF SKYWALKER isn't the worst film in this trilogy (or series) but it isn't great.  Actually, it's rather tedious until the last 20 minutes or so.  I only saw it because I'm OCD about completing a set of films, and supposedly this is the end of the Skywalker saga.  Yet, knowing Disney, STAR WARS is far from over, but I'm done.  Yes, I've heard THE MANDALORIAN is amazing and Baby (not really) Yoda is super adorable, but I don't subscribe to Disney+ and I really don't give a crap.  So, yes, my golden companion, this agony is finally at an end.

~~~~~~~~~~~~~~~
Thank you to Gill J. of Realweegiemidget Reviews https://weegiemidget.wordpress.com/ & Barry P. of Cinematic Catharsis http://cinematiccatharsis.blogspot.com/ for including my blog in The Vincent Price Blogathon!) 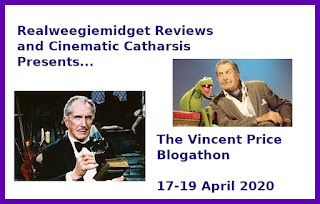 10 cups of teenage awkwardness
5 cups of teen angst
4 cups of fairy tale snowflakes
4 tablespoons of Mary Shelley's Frankenstein.
3 tablespoons of Vincent Price
Fold ingredients together and shape dough into a heart
Bake until golden brown
Serve through Tim Burton's offbeat perspective
There you have the 1990 film EDWARD SCISSORHANDS. 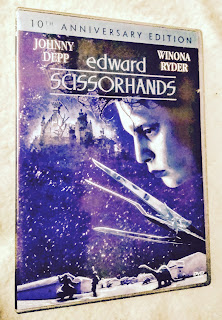 The classic actor, and master of the macabre, elevates EDWARD SCISSORHANDS from a good, but sometimes flawed film to something truly special.  He portrays an eccentric inventor in three poignant flashbacks.  Vincent Price is fully in his element within these scenes and it shows in his performance.

In the first flashback, we see The Inventor enjoying the wonder of his elaborate, and totally Tim Burton, cookie-making machine.  The Inventor picks up a cookie heart and holds it up to the chest of a nondescript mechanical creation. 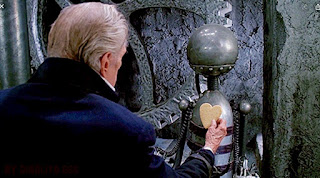 In the second flashback, The Inventor has begun transforming the mechanical creation into a person.  He reads from a book of social etiquette to Edward and can see the boredom in his burgeoning young man.  He then reads an amusing poem and, to The Inventor's delight, Edward smiles. 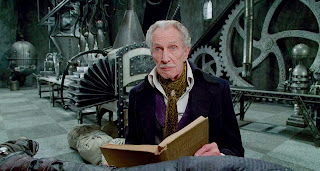 In the final flashback, Edward stands waiting as The Inventor retrieves an early Christmas gift.  He holds up a set of hands for his incomplete young man.  Edward is fascinated, gingerly touching the hands with his large scissorhands.  Suddenly, a look of painful realization flashes across the eyes and face of The Inventor.  Edward's scissors slice through the gift of hands as The Inventor collapses, presumably from a heart attack, leaving his creation unfinished and alone. 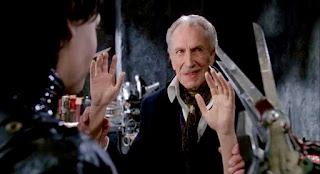 Vincent Price, in one of his last roles, is more than enough reason to see EDWARD SCISSORHANDS.  In my opinion, he is the heart of this tragic story because we see Edward's soul through The Inventor's eyes.  It's regrettable Vincent Price was only in a few scenes, but the film and the viewers are rewarded by his unique presence. 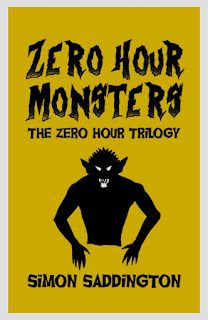 Joel is a kid with an active imagination.  He sees monsters around every corner.  Through his eyes, some of the adults in his town may be otherworldly creatures in disguise.  What if it's not just in Joel's imagination?  What if monsters are real?  Joel and his best friend Peter may uncover a truth bigger than Joel's imagination when they follow a suspected werewolf home...

Author Simon Saddington weaves a fun and fast-paced tale for kids and adults which will leave you wanting more.  One aspect of ZERO HOUR MONSTERS that really stands out for me is how vibrantly the author captures the innocence and magic of being a kid.  My childhood self completely related to Joel's belief in the existence of Yeti and the Loch Ness Monster.  I just hope Joel, unlike me, never grows up and suffers from a skepticawl mind.

You can find ZERO HOUR MONSTERS by Simon Saddington from an Amazon near you...

Whatever Happened to the Boy Next Door?

He glances at the clock.  Its incessant ticking is a reminder of missed opportunities and wasted years.  He once seemed full of life, vibrating with potential.  Now he sits alone at the kitchen table, waiting.

The rejection letters scattered before him draw his attention away from the pounding clock.  He finally tried, after lingering in a paralytic state of mind.  Now he wonders how long one should keep trying, which is why he waits.

A swig from the vodka bottle clutched in his left hand should burn his throat, but physical pain has long since been muted.  All that remains is the emotional remnants of a failed life.  He takes another swig and looks at the deafening clock.  Now he knows the waiting is over, cocking the gun gripped in his right hand.
____________________

(This piece of flash fiction was inspired by a recent selfie.) 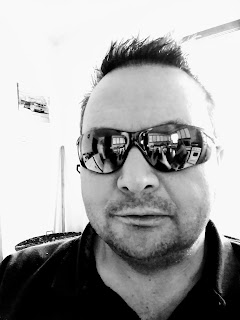 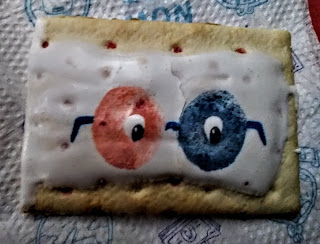 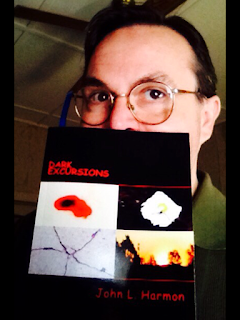 It was April 4, 2015 when the 4-in-1 print edition of my e-books series became available to the world.  While most of the readers reside in the United States, a few copies of my post-modern gothic romance exist in other countries.  Knowing that, in total, 23 copies of DARK EXCURSIONS are out there somewhere gives me a bit of comfort.

I've probably mentioned it before, but I imagine some far of future freak like me stumbling across one of the copies of DARK EXCURSIONS, connecting with its emotionally damaged characters.  Maybe he or she will wonder why my words never reached a bigger audience and decide to make it their life mission to correct this oversight.  He or she will share my book with friends and slowly a cult following will develop.  The cult will then grow into annual conventions where fans dress up as their favorite characters.  Maybe a hardcore fan will go to extremes when attending as  Dinkel, the one-armed gardener.

Then maybe a streaming service of the future will turn DARK EXCURSIONS into a series, which will be a massive hit.  The actors will become overnight famous, winning all sorts of awards.  The viewers will eagerly discuss the latest episode while waiting for the Soylent Green trucks to arrive.

I had planned to celebrate this 5th paperback anniversary of DARK EXCURSIONS by creating a cast list of current actors I would like to see in a series or a film.  This was harder than I expected.  Even while I was writing my book, I had Nicole Kidman in mind as the cold, yet overtly sexual Anapola Van Der Van.  I also had a specific person in mind when I created Father John Francis.  "Who?" you might ask.  Well, I gave that seriously disturbed priest my name and my appearance.  Read what you will into that, Dr. Freud.

As for the rest of the characters, I didn't have anyone in mind while writing, but I later came up with a few interesting choices.  However, some of my choices didn't quite ring true to me.  So I figure I'll just let others cast the series or movie in their own minds while they read my book.

Thank you to all those readers...past, present & future...for breathing life into my characters.  Without you, Anapola, Dinkel, Crop and Cheryl would just be words on a page. 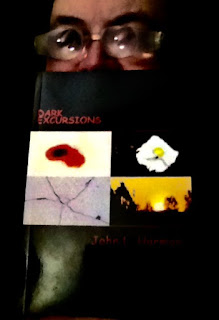 (Side Note:  I imagine a DARK EXCURSIONS series or film beginning with the song The Trick is to Keep Breathing by Garbage and ending with Devil Inside by INXS)