creation
Your movements are what drew me in
Like the soft caress of refrain
Gentleness in thoughtful motion
Throughout thine rugged terrain
A protrusion from a skier's dream
Many ways it swoops and sweeps
And underneath the hollows sit
Cavernous and deep
But 'tis your eyes that hold me now
Captured me tight in gaze
This is surely a place where poets go
When their names are but a haze
Melancholic longings found within brown
Surrounded by ample milky white
Teeming with phantasmagorical odes
For love kindled at first sight
~~~~~~~~~~~~~~~~~~~~
10/17/2008
John L. Harmon

Freak Out,
JLH
P.S. Click REEL to read another poem from another time.
Posted by John L. Harmon at 8:34 AM 2 comments: 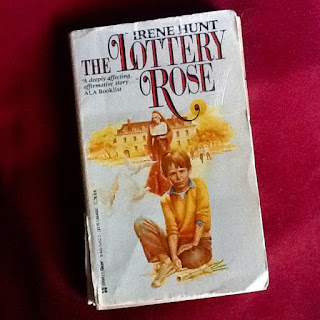 "The best prize in the world," he whispered...
(from The Lottery Rose by Irene Hunt)

Many years ago, during the 1986-87 school year, I read The Lottery Rose by Irene Hunt.  I recall the story of an abused boy and his rosebush being an emotionally traumatic experience for my younger self.  Though much of the specific plot details had been lost to time, I know I cried a lot, probably because I related to certain aspects of Georgie, the main character.  His loneliness, specifically, especially in the claustrophobic conditions of a school building.

This emotional impact is probably why the title of the book stayed with me all these years, so when I recently found a beat-up copy at a rummage sale, I purchased it for a quarter without a second thought.  After my purchase, while I finished reading the book I was in the middle of, I started to have that second thought.

Do I really want to relive a devastating childhood literary memory that might bring devastating real life school memories to the surface?  What if I read it now, with older and more cynical eyes, and find the story lame, or worse, wretchedly eye-rolling with a vomit-inducing happy ending?

These were my legitimate concerns as I held the paperback in my hands. The brief cover review didn't alleviate my latter concern, "A deeply affecting, affirmative story..." - ALA Booklist.  Despite this, and the nun on the cover which caused me to expect the story to take a severely religious turn, I opened the book and carefully stepped back in time.

Many words and many tears later, I closed the book, emerging with a better understanding of what I read those many years ago and why it hit me so hard.  The story, unfolding in a very matter-of-fact way, which I appreciate, is a heartbreaking and beautiful study of life, death, and overcoming seemingly insurmountable odds to find the truth, beauty and strength in yourself and others.  The author's words are direct, and full of compassion and understanding of the complexities of human existence, in both children and adults.

I still relate to certain aspects of Georgie.  His loneliness, his awkwardness and his ability to lose himself in books are relatable.  Only one real life school memory reared its ugly head, though it is tied to so many other memories...a certain elementary teacher who seemed to relish in making me feel stupid and calling me so.  She is why I hate math to this day and why I hate feeling stupid, even though I often feel that way.  I need to take a cue from The Lottery Rose and see past what was and focus on what is, whatever it is, but that is another blogpost for another time.

As for the ending...well, I didn't roll my eyes or vomit because I was too busy wiping away my tears.  It was an emotionally satisfying conclusion to a most beautiful book.

P.S.  Here is a post about a book I wish I could have read when I was younger...
http://freakboyzone.blogspot.com/2014/04/the-writers-bend-becomes-wallflower.html
Posted by John L. Harmon at 4:31 PM 2 comments:

Once. Twice. Three Times a Jedi.

I have a long and complicated history with STAR WARS.  For example, when I was a kid I loved Ewoks, but now not so much.  Yet, Jar Jar Binks was so unbelievably annoying that he has made me appreciate those furballs from the moon of Endor.  I guess I could say that if the wretched prequels did anything right, it was to make Return of the Jedi, with its many flaws, look brilliant.  Well, that and Christopher Lee, especially during his lightsaber duel with Yoda.  That was a fantastic moment from Attack of the Clones.

Believe me, I could blog on and on about the original trilogy and the prequels, and maybe I will someday, but right now I want to touch upon The Force Awakens.  Even though the film's twists and turns are probably public knowledge by now, I will try not to fall down the galactic spoiler hole for the sake of those handful of people who want to see it, but haven't yet.  Of course, as we fans know...there is no try.

I saw The Force Awakens, with my sister, the day after its opening.  All I expected was for it to be better than the prequels, which it succeeded.  A week or so later, I caught a matinee just so I could absorb the film more completely.  It held up to a second viewing.  Now, several months later, I borrowed a copy from the library for a third viewing.  It surprised me how much it held up on the small screen.

I got happy, feel-like-a-kid-again butterflies in my stomach when Rey first piloted the Millennium Falcon on Jakku, beautifully zigging and zagging over the desert landscape.  The enduring friendship of Han Solo and Chewbacca still brought a silly grin to my face, especially when Chewie hands Han the winter gear he, Han, had quickly discarded.  Even Snoke's obvious CGI appearance looked a little better on the small screen, though his ridiculous name continued to make me chuckle painfully, not that I should be too judgmental about character names -cough, Dinkel.  Oh, and I am very pleased that it appears BB-8 and R2-D2 are friends instead of having them be equally adorable droid rivals.

Now, I've heard the big complaint that The Force Awakens is simply a remake of A New Hope.  While I agree that it does borrow heavily from the original, it does have its own plot threads.  Yet, if you are as maladjusted of Star Wars geek as me, you would see Awakens borrows elements from The Empire Strikes Back (a father/son confrontation from a perilous height) and Jedi (knocking out the shield from the ground).  Not to mention that Jedi borrows heavily from Hope, so what goes around comes around.

All that being said, I want to take a moment and complain about a few things that bug me about Episode Seven...

1.)  I really miss the epic intro of the 20th Century Fox fanfare, but at least we weren't subjected to the Disney castle and Tinkerbell before, "A long time ago in a galaxy far, far away..."

2.)  The insta-friendship between Finn and Poe feels forced, no pun intended, and therefore is based solely on plot, not character development.

3.)  Everyone is going around talking about the "Light Side" of the Force, which sounds silly and seems like a way to dumb down the concept.  Not so long ago, Luke felt there was still good in his father, not that there was still "light" in him.

4.)  Leia and Rey hugging near the end doesn't make a lick of sense.  They have never met, as far as we know at this point, and Chewbacca just strolls by, blatantly ignoring the grieving princess, er, general.  Chewie hugging Leia would have made much more sense and had a deeper emotional impact.

Ultimately, these are just my thoughts and opinions.  I could be wrong, but I could be right because, as Obi-Wan Kenobi was overly fond of saying, it's true from a certain point of view.

P.S.  I watched The Force Awakens with English subtitles and noticed that during Rey's lightsaber hallucination, Obi-Wan says her name.

P.S.  This tweet from Billy Kravitz may go down as one of my favorite things ever said about me or my writing.
Posted by John L. Harmon at 10:03 AM No comments: