freakboy on film: NOTHING BUT THE NIGHT (The Christopher Lee Blogathon Edition)

Thanks to Barry and Gill for inviting me to participate in The Christopher Lee Blogathon!

Check out the other reviews this weekend... 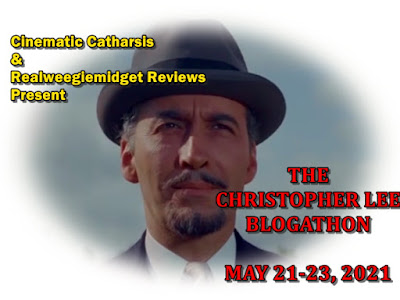 If NOTHING BUT THE NIGHTisn’t the title of a 1980’s pop power ballad, it totally should be.   However I’m talking about a 1973 film starring Christopher Lee and Peter Cushing.  Honestly, I had never heard of the film until Prime Video recommended it to me.

The Van Traylen fund is having some problems.  Its trustees are dropping off like flies, but they appear to be suicides.  Then a bus, loaded with really obnoxious singing orphans, has an accident, killing three more trustees and landing one young girl in the hospital.  Well, this peaks the interest of Colonel Bingham and Dr.  Ashley.  Their investigation leads them to the traumatized young girl and her unstable jailbird mother.  As Bingham and Ashley dig deeper into the mysterious deaths, with the help of a reporter, the clues lead them to a school with a very dark secret.  Is it ritual murder or is it a plot similar to a big hit from a few years ago?  I would tell you, but you’d tell me to get out of here.

After the slam-bang opening scenes of murder, NOTHING BUT THE NIGHT settles into an evenly paced plot.   The film may not be action-packed, but trying to figure out the crazy story held my interest.  An extremely entertaining, full throttle performance by Diana Dors as the girl’s mother also kept me engaged and guessing as to her character’s motive.  Peter Cushing, of course, lights up the screen as Dr. Ashley with his subtle, classy charm.  Then there is the man of the hour...

Honestly, when I think of Christopher Lee, my first thought is Hammer horror.  His portrayal of Dracula, to be specific, because he owned that role.  Then I think about his appearances in two of the Star Wars prequels, elevating them more than they deserve.  Finally, I think of his appearances in a few Tim Burton films, especially Sleepy Hollow and Dark Shadows, which seem appropriate.  So, it was refreshing to see him play an ordinary person in NOTHING BUT THE NIGHT.

Christopher Lee portrays Colonel Bingham as an intelligent, intimidating, no-nonsense kind of man.  He may be surrounded by threads of the supernatural, but he’s not overly touched by it.   Lee gives a good performance, even showing Colonel Bingham’s vulnerable side during the jaw-dropping ending.  PSA: Just say no to bonfires!

I must add that seeing Christopher Lee and Peter Cushing together in a film is always thrilling.  Even more so since their characters are on the same side.  Their chemistry is palpable and probably makes NOTHING BUT THE NIGHTeven better.

In conclusion, if you’re in the mood for a slow burn supernatural mystery, with an ending that will not disappoint, NOTHING BUT THE NIGHT may be the film for you.  However, if you’ve never seen a Christopher Lee film, you may want to get to know him in other films first and then come back to this one.

P.S.  Here is my post from the last Blogathon I participated in...

For some mind-altering music, check out this month’s Collective Eye interview...

channel freakboy: JOSIE AND THE PUSSYCATS IN OUTER SPACE (1972) 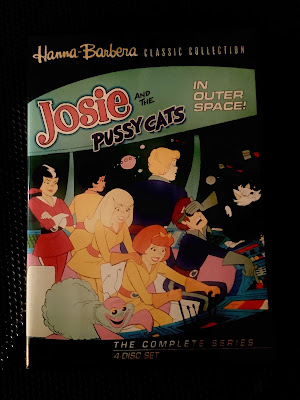 (I stand at a podium bathed in a blinding spotlight within a darkened auditorium.)

My name is John and I’m a toon junkie.  It started as a Saturday Morning Mid~Life Crisis, but it turned into an addiction.

It’s been a few weeks since I last used, but I know sharing my story is an important step on the long road to recovery.

My sister found me on the outskirts of Riverdale, licking the bottom of a cereal bowl while wearing old, tattered Aquaman Underoos.  She tried to hold an intervention, but I wasn’t ready to admit I needed help.  So, after downing some Quisp, I strapped on one of my dad’s adult diapers, carjacked a driverless car and programmed it to take me to Florida.

You see, I heard that my favorite animated pop band was scheduled to perform at the latest rocket launch and I didn’t want to miss it.  Once there, I was annoyed that I couldn’t get a closer view of Josie, Valerie, Melody, Alan, Alexander, Alexandra and Sebastian riding up the elevator to the boarding platform, so I did what any fan would do.  I knocked out a security guard and took his uniform.  That’s when I suddenly decided to sneak aboard the rocket.  If Josie and the Pussycats were going to perform on the ship, I wanted front row seats and a chance for selfies with the band! 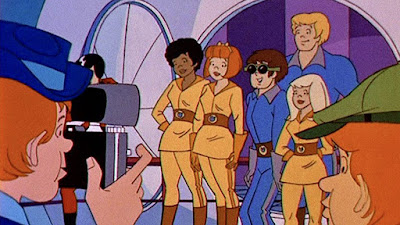 The Quisp high has blurred my memory of how exactly I got aboard, but I clearly remember what happened next.  Reporters were preparing  to snap a few pics of the band when Alexandra tried to photo bomb the moment.  Josie and the gang tumbled into the rocket and accidentally blasted us off into Outer Space!  I held on for dear life and was thankful that I had grabbed a spare adult diaper. 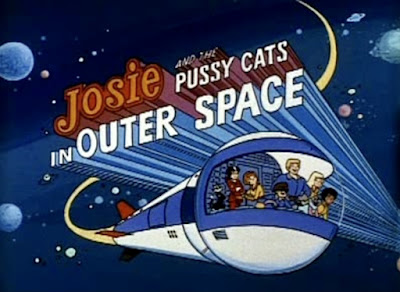 It’s true, I was with Josie on a rocket ride.  Yes, the Pussycats were by her side.  Valerie and Alan were trying to steer the long, phallic ship, while Alexandra’s pushy offers to help got us more lost in Outer Space.  Alexander was quaking in fear, cementing his role of chicken and Shaggy clone.  I fully expected him to shout, “Zoinks!”  Melody, upon the first planetoid we crashed, befriended an alien named Bleep, as in “What the BLEEP is that BLEEPING thing?”  The answer...a walking, talking (sort of) piece of space laundry lint. 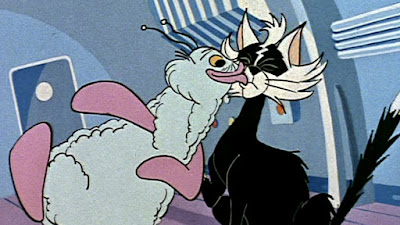 The Pussycats’ Outer Space adventures were similar to what they experienced on Earth.  I mean, who knew there were so many alien dictators wanting to conquer Earth?!?!  Fortunately, Josie and the gang always stopped the villains.  Unfortunately, they performed new songs, which was more than enough punishment for the baddies. 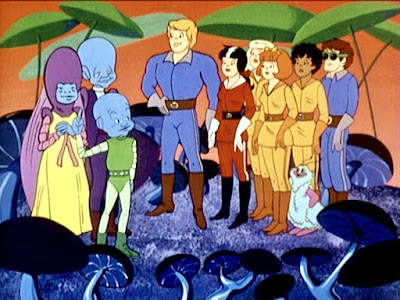 I don’t know if it was the acoustics of the rocket or the alien atmospheres, but the band’s music lacked that special something.  The songs were fine but forgettable or maybe my Quisp high was wearing off.  It was then I decided I needed help for my problem.   After 16 adventures with Josie and the Pussycats in Outer Space, I had them drop me off on the nearest planetoid to wait for the animated STAR TREK crew to find me and bring me back to Earth. 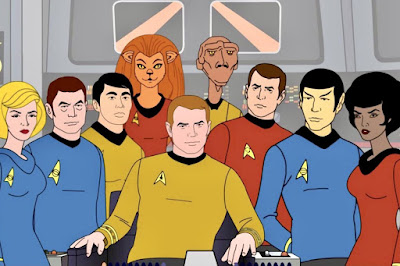 And that’s my story of cereal, Saturday Morning and addiction.  I hope you see me as a cautionary tale.  Thank you.

(The lights in the auditorium flicker on and I stand in disbelief.  Dr. Zaius shakes his head with disapproval.  Cornelius and Zira gaze at me with concern, while General Urko calls for his troops.  I realize the Trek crew dropped me off in the wrong time.  Damn them all to Hell!  They returned me to the animated Planet of the Apes!) 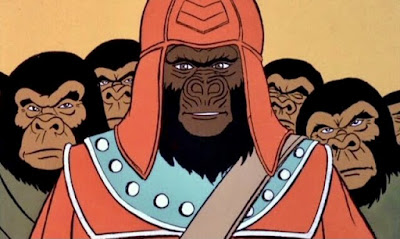 In conclusion, I know I had seen JOSIE AND THE PUSSYCATS IN OUTER SPACE in reruns as a kid but it felt like watching a brand new show.  There’s entertainment value to be found but it doesn’t click like the original earthbound series.  My biggest complaints center around all of the missed opportunities for Alexandra to be awful to everyone and the lackluster music, but it’s all a thousand times better than a certain teenage witch.

SIDE NOTE: I think this marks the end of my Saturday Morning Mid~Life Crisis/addiction.  Though, a little shop, some killer tomatoes and a galaxy high on You Tube are all tempting me.

JOSIE AND THE PUSSYCATS

CAPTAIN CAVEMAN AND THE TEEN ANGELS

For some mind-altering music, check out this month’s Collective Eye interview...

Have you ever purchased a DVD mainly for an item on the Special Features list?  Well, I recently did. 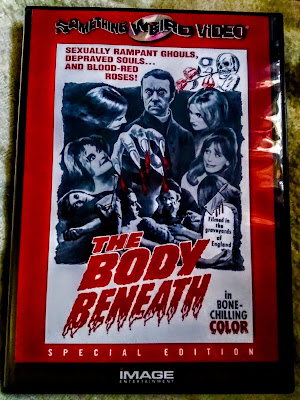 Don't get me wrong.  I enjoy THE BODY BENEATH and its tale of vampires stalking English graveyards with the help of a dodgy maid and a sympathetic hunchback, but it's not my favorite Andy Milligan film.  I honestly don't know if I would've purchased the DVD if it wasn't for the short film VAPORS being included.
I originally noticed VAPORS listed on IMDb.  It's Andy Milligan's first film, but I didn't fully investigate it until I saw the trailer on THE GHASTLY ONES/SEEDS OF SIN DVD.  The trailer was just a series of stills showing various men, but it was explained that VAPORS was a motion picture of real life in a homosexual environment.  Well, I knew I was going to see this film and IMDb led me to THE BODY BENEATH DVD.  Believe it or not, I didn't just blindly order it.  I searched You Tube and streaming services before double checking the Something Weird Video website to make sure VAPORS was actually on the disc. 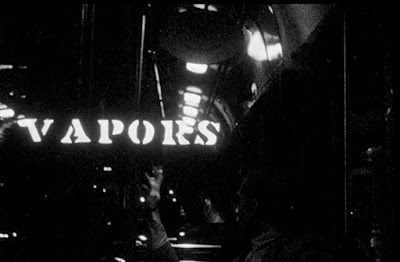 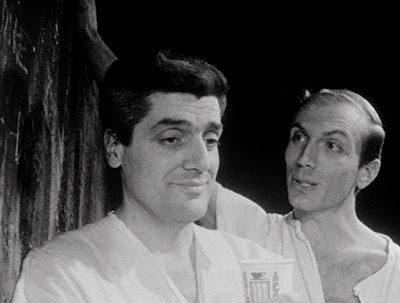 Out of all the rooms in all the bathhouses in the world, Mr. Jaffee wanders into Thomas' room.  A conversation begins between these two men, brimming with anticipation and emotion.  Life, loss and attraction fuel the word exchange as they draw nearer to one another.  If only they wouldn't be constantly interrupted by the other patrons of the baths. 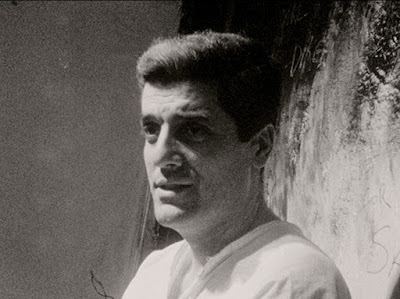 "An insane asylum for homosexuals," Mr. Jaffee remarks to Thomas about the baths, and he might be right.  Some of the scenes with the other patrons could easily be set in a mental hospital with little adjustment.  The characters pop in and out to say something witty, droll or bitchy and often distract from the intense and fascinating conversation between Thomas and Mr. Jaffee. 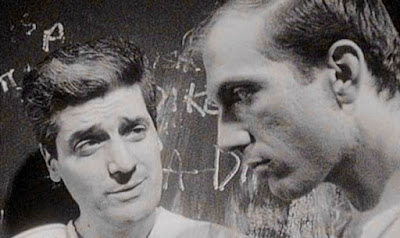 Robert Dahdah brings a quiet stillness to Mr. Jaffee as his reasons for coming to the bath slowly unfurl.  Gerald Jacuzzo brings honest realism to Thomas as he sympathetically listens while trying to steer the conversation towards the reason men come to the baths.  Screenwriter Hope Stansbury expertly captures the initial awkwardness of strangers meeting and how it is sometimes easier to bare your soul to someone who doesn't know you.
I confess that I am disappointed Andy Milligan didn't write VAPORS because its raw honesty occasionally reminded me of FLESHPOT ON 42ND STREET.  However, he does an amazing directorial job, especially with the scenes between Mr. Jaffee and Thomas.  The framings make the viewers feel like they are in that room, eavesdropping on the intimate conversation.  Maybe we are the eye that Thomas feels is watching them.
In conclusion, If you are into classic LGBTQ+ cinema, then you should definitely seek out VAPORS.  It's a rare glimpse of pre-Stonewall times in the lives of queer men, with a last scene so raw and honest (for 1965) that it had to be censored a bit.
As for the late Andy Milligan, he's still not done with me yet.  His 1970 film NIGHTBIRDS has peaked my interest, but sadly seems only to be available on a Region 2 Blu-Ray/DVD combo pack.  If anyone knows of NIGHTBIRDS streaming somewhere, or a reasonably priced Region 1 or All-Region DVD, please let me know.  Thank you!
Thank you for reading or listening to my half-blind words.
Freak Out,
JLH
P.S. A different film about a different bathhouse from a different decade...
https://freakboyzone.blogspot.com/2020/06/freakboy-on-film-saturday-night-at.html
~~~~~~~~~~~~
New Month!
New Eye!
New Interview!
👁
https://thejlhcollective.blogspot.com/2021/04/the-collective-eye-may-2021.html

~~~~~~~~~~
I'll be participating in The Christopher Lee Blogathon later this month, thanks to....
CINEMATIC CATHARSIS
&
REALWEEGIEMIDGET REVIEWS 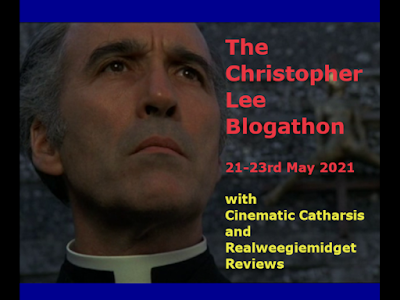