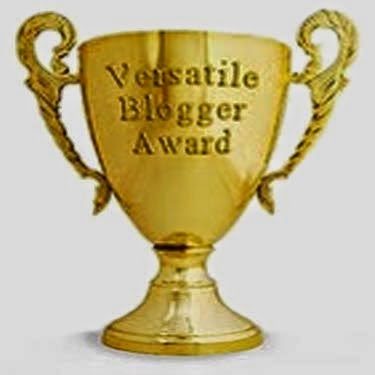 I sometimes barely consider myself a writer, let alone a blogger. Sure, I sporadically post a so-called "poem" or short story, but I don't really post on a regular basis.  This fact added to my surprise when Barry of Cinematic Catharsis nominated me for the Versatile Blogger Award.  His eclectic film reviews have entertained and added to my cinematic knowledge, so you should definitely check out his blog.  Plus, Barry has a cat named Buster (as in Keaton) who has eyes of different colors, similar to my Miss K!

Over my two years on social media, I have experienced the unique writings of other Versatile Bloggers from various locations.  Some of them post less often than I do, if that is possible, but infrequency does not diminish their words.  I now proudly pass on this nomination to 10 of these awesome people...


1.  I was infected with the writing bug in 2nd grade when I wrote a story (now lost) about a sailor caught in a whirlpool who wakes up on an island of dinosaurs.  Believe me, this was more Land of the Lost than The Lost World!

2.  I cohabitate with my sister and we are the caretakers of two felines...Miss K and Mr. B.

3.  I don't own a smartphone.  Technically, I don't own any kind of mobile phone.  I have access to a flip-phone, if I truly need one, but the idea of everyone being able to reach me anywhere at anytime has never appealed to me.  Plus, from what I hear, mobile phones are generally an endless stream of outrageous bills.

6.  I've been mistaken for a teacher, but I'm not one.  The reason for this mistaken identity is I hang with educated friends.

7.  I've been mistaken for a professional in the medical field, but I'm not.  (see 6 for the reason)

8.  I have been behind the scenes of an eating establishment, but not a cook.  I have never wanted the responsibility of not spreading salmonella to the public.

9.  I am currently the most archaic creature in the world.  A paperboy.  It generally keeps me away from people and provides time to write.  Not that I write as much as I should.

Be well & Freak Out,
JLH

Whipping The Midnight Oil (the excursion behind DARK EXCURSIONS)

The year was 2006 and the rejuvenating promise of Spring was in the air.  I was visiting family and friends in my former stomping grounds of Omaha, Nebraska.  There were many sights and sounds to experience, but soon all of that weekend would be centered on one night...and one word.


After settling into my weekend accommodations, I ventured out into the city, literally just around the corner, to visit Jody.  Jody has been given many names over the years (partner in crime; the elusive Jody; the ol' standby; Debbie A; my muse) but first and foremost she has been called my friend.

That fateful Friday took us to a movie/music store, a book store, a department store's brassiere section, a restaurant (probably Spaghetti Works) and then finally back to Jody's apartment.  Once there, we stretched out on individual couches as a refreshing breeze wafted through her open patio door.  Hydrating and talking commenced, with a myriad of shifting-changing subjects to entertain our minds.  Night and conversation dutifully marched on, leaving us in the dim darkness of a distant streetlamp.  This is when the subject of soap operas was brought to light.

We spoke of the fun things about soaps, along with the eye-rolling things.  At the time, I was watching One Life to Live fairly faithfully and barely keeping up on General Hospital.  Jody was not watching any soap at the time, but she freely admitted to once being hooked on suds, specifically The Bold and the Beautiful.  She mentioned a uniquely named character and how annoying it was when an overly emotional female character would cry out his name...

Whip sent me into a paroxysm of laughter.  In hindsight, it was not only the unique name, but also Jody's interpretation of a needy soap character that caused my outburst.  I was laughing so hard that I nearly spilled my glass of water, and I continued sporadically laughing until it was bedtime.  Jody offered me a couch, but I had a bed waiting for me, literally just around the corner.

Back at my weekend accommodations, I tucked myself in and tried to fall asleep, but my mind had other plans.  I kept hearing Jody's Oh, Whip, which sent me back into hysterics until the gears in my head started turning.  What could I name a character which would be a similar name to Whip, but wouldn't be Whip? I asked myself.  The answer came quickly...

Crop, as in riding crop.

Another paroxysm of laughter drove me out of bed to the light switch and my luggage, where I kept a handy little notebook.  I quickly wrote the name  Crop, but I knew he needed a last name.  Within seconds, Hoppins was written down, and I knew he was a stable boy...NO...a former stable boy!  Then I figured he needed a love interest, so Cheryl was created, and I knew she was from a rich family. A rich family with the most pretentious sounding last name I could think of...Van Der Van!  A great love affair needs a complication and this came in the intriguing name of Luchia Diego, who I knew was married, bored, but relished her status in society.  Therefore, -Smith was soon attached to her last name.  Last, but certainly not least, I knew a situation such as this needed a character who knows more than he is letting on.  A gardener...NO...a one-armed gardener! A one-armed gardener named Dinkel!

With gleeful, possibly maniacal laughter, the initial seeds of Dark Excursions were planted and taking root in my soon slumbering mind. The weekend quickly passed and I arrived home with a plan to write one chapter for Jody as a cheeky wink and nod to our late night soap talk. After finishing that first chapter, I realized Dinkel was absent and unmentioned, which I considered a terrible slight on my part.  So I wrote a second chapter, but then I wondered about Cheryl's mother, who had been discussed in an overbearing, omnipresent way.  Once a third chapter was completed, I knew I had to write more because I wanted to know more about these emotionally damaged characters and the tightly controlled universe they inhabited.

Now, after years of writing, editing, failed attempts at finding a literary agent, more editing, e-books, and yet even more editing, a print edition of Dark Excursions at long last became available on April 4, 2015. Seeing my childhood dream of being a published author (albeit self-published) is exciting and satisfying.  Maybe I didn't go through traditional channels, but I'm utterly fine with this because I have rarely been traditional.

For further information on the print edition of
DARK EXCURSIONS,
please click on
Createspace
or one of the following
Amazon links...

P.S.  Dark Excursions is still available as an e-book serial.


I recently realized that I have never included a sample chapter of DARK EXCURSIONS: fourth set within this blog.  A thoughtless error on my part.

We now take you to the gazebo...

Anapola watches the sheriff walk slowly away, taking the heavy aroma of cheese and fish sticks with him.  Clutching the manila folder, she attempts to bury the gnawing fear, but the information only enhances it.  Add Cheryl's obsession with following in her father's footsteps, and the fear becomes palpable and dangerous, threatening to unravel Anapola's tightly woven universe with its whispered secrets.

We now take you to the former hollyhock garden...


This fear came from deep inside the woman and it was troubling to witness.  He cannot begin to imagine what could possibly scare Anapola Van Der Van so much.  In all honesty, he doesn’t want to find out.


The former trapeze artist has plenty of his own worries and fears to occupy his mind.  He shakes off the unnerving incident and resumes his work, keeping one eye peeled toward the sun.


We now take you to a pharmaceutical company...


The empty hallways sharply echo their overlapping footsteps, creating the ambiance of a dusty museum, instead of a thriving pharmaceutical company.  To add to this sensation, large framed photographs dot the smooth white walls and Cheryl takes note of each captured moment.  The majority of the pictures are of Charles.  In every instance, he seems to be casting his stern blue eyes at his daughter and the audacity she has displayed by entering this sacred building.


We now take you to an entrance...


Time suddenly seems of the essence and he breaks into a sprint for the mansion.  A sensation of something ominous pulsates inside him, keeping time with each pounding foot.  He reaches the enormous door and tears it open without hesitation or thought, other than for Dinkel.
____________________________
Copyright 2013, John L. Harmon 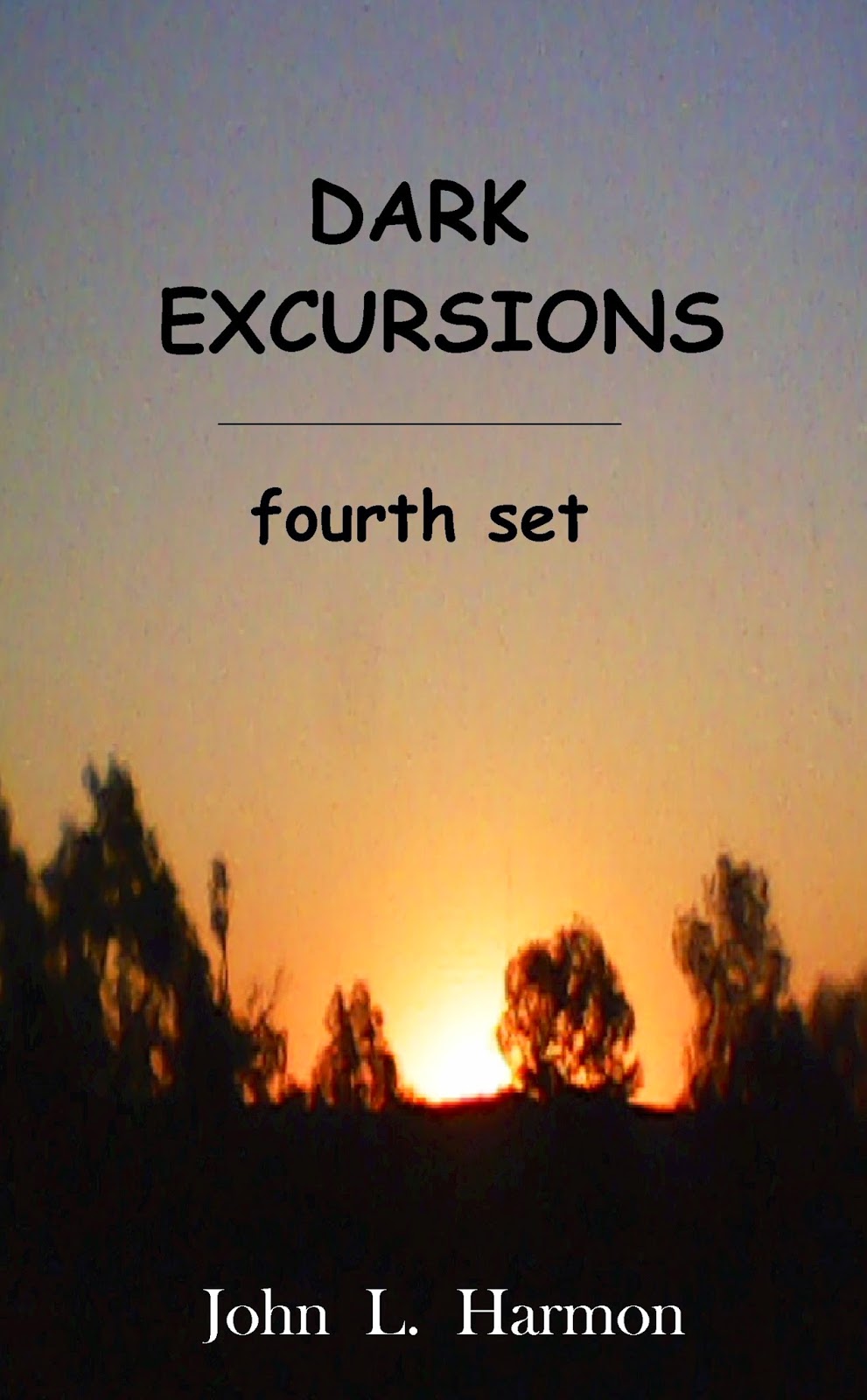 Be well & Freak Out,


P.S.  Click WHIP to read about the excursion behind Dark Excursions.
Posted by John L. Harmon at 8:53 AM No comments: