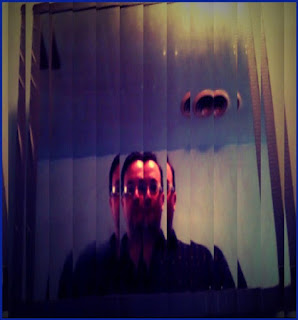 Do I half-see my authentic self staring back at me in the mirror?

Does he see past my many faults and imperfections?

Can he detect my hidden strength underneath my layers of self-doubt?

Does he wish my eyes would gleam with mischievous brilliance once again?

Can he find a way to make me honestly smile more often?

Will he love me even when I feel unlovable?

Will the answers in my reflection remain forever obscured by my damaged eyes?

He currently resides left of center in the state of Nebraska and has been visually impaired since December of 2016.
Posted by John L. Harmon at 8:46 AM No comments: 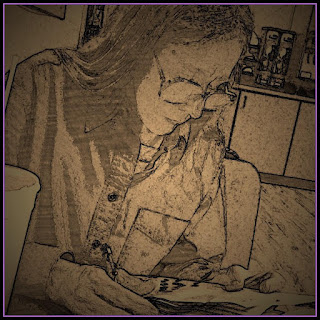 I wish I could believe in myself as much as my sister believes in me.

She often feels like the only voice saying yes while the rest of the world says no with its silence.

I honestly don't know what I'd do without her, especially now that I'm visually impaired.

Make no mistake, she may believe that I'm the special one, but she is far more special and amazing than I could ever hope to be.

He currently resides left of center in the state of Nebraska and has been visually impaired since December of 2016.
Posted by John L. Harmon at 8:35 AM 2 comments:

I was having a good day on Wednesday until I ordered my 19th free Blizzard at Dairy Queen.  I was told I wasn't allowed to order the Royal New York Cheesecake because my DQ VIP card is only for regular Blizzards.  Never mind I had previously ordered the 3 other Royals.  Also of note... I had my sister examine my so-called DQ VIP card and nowhere is it written: excludes Royal Blizzards. 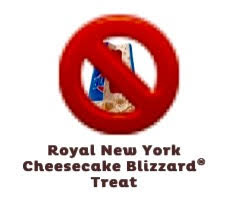 The Royal New York Cheesecake was to be my final menu-listed Blizzard.  It was also going to be an extra special treat to celebrate achieving my first New Year's Revolution goal. Disappointment threatened to overwhelm me, but the feeling of accomplishment over The JLH Collective kept my emotions above water.  Yet, this moment of restriction melted my excitement over this Blizzard Bonanza.

This is why I'm ending my series of Blizzard blogposts.  I can no longer allow my ice cream words to be free advertising for a company with questionable definitions of VIP and customer service.  I may still collect the remaining free Blizzards as restitution for this ice cream injustice, but I will no longer blog, post or tweet about them.

Much like other decisions I've made this year, ending these often fun ice cream posts was a difficult one.  These posts have inspired me to blog more frequently and for that I'm grateful, but I'd feel dishonest if I tried to happily continue reviewing flavors if I can't even try them all.

I am sorry to any reader out there who has been enjoying my ice cream words.  Thank you for your support and I'm sure there will be other tales to tell.

He currently resides left of center in the state of Nebraska and has been visually impaired since December of 2016.

March 2018 marks the 5th anniversery of DARK EXCURSIONS: first set and I want to express immense gratitude to the daring individuals who have taken a chance on my initial twisted tale of love, sex and death.  Your kind words and support have kept me creatively going when the rest of the world seems to scream stop.  Thank you, my awesome readers!
I also want to thank Jody, my longtime friend and occasional muse, for that one crazy-fun day in the Spring of 2006.  That terrific day ended with hysterical laughter and a list of character names.  Thank you, Jody!
When I think back to publishing DARK EXCURSIONS: first set in March of 2013, I remember feeling excited, terrified and hopeful.  I still feel these emotions whenever I post on this blog or upload a video to The FreakOptic Files, though age and my chunk of vision loss keep my expectations a bit more realistic than five years ago. 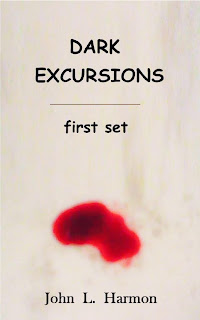 Thank you for reading my half-blind words.
Freak Out,
JLH
P.S.  The trailer for DARK EXCURSIONS: first set is far from my best video ever, but I still enjoy it.  Probably because it provided a creative use for my vodka bottle photo. ;)