Since I've been moody (my factory default setting) and lazy (a true art form), here is something I filled out on Facebook instead of writing a real post.  I guess it might assist you in getting to know me better.  My apologies in advance.

Everything is so serious on Facebook these days. Let's have a little fun. (Curious as to what others have to say on their own.)

Four things I am looking forward to:
1.   Posting this
2.   Strange Little Birds
3.   The bleak nothingness of the future
4.   Breakfast

I knew the books existed back then, but I was younger and the television series was still airing.  I assumed I would be annoyed if the books remotely deviated from the onscreen story, and I didn't particularly desire to purchase a book from the teen section.  So I departed Borders (remember that book store?) and continued to enjoy POPULAR as it aired on The WB from the fall of 1999 to the spring of 2001.
I thought of the books when the two seasons of POPULAR were (finally) released on DVD in 2004 and 2005.  I even made the effort to search for them online and off.  I discovered the author's name (Nancy Krulik) and noticed a book or two for sale online, but I wasn't convinced that I would enjoy them or even really wanted them.  After all, I could pop in the series anytime to relive the satirically dramatic high school angst found in the hallways of Kennedy High.
Then came 2016 and I suddenly decided that I was ready to read one of the books based on one of my favorite television series.  Having remembered the author's name, I quickly found four titles on Amazon.  I noticed the books were numbered and even though I am typically strict about reading series (or sequels) in order, I ordered the one that sounded the most interesting.  My choice may or may not have been influenced by the character of Mary Cherry (as brilliantly portrayed by Leslie Grossman) being prominently displayed on the cover.
So, after very nearly two decades, I (finally) read a POPULAR book, and I wasn't disappointed.  I found it extremely entertaining.  Sure, there were moments that seemed off and unlikely to occur within the television series, but overall the characters were captured well.  As for the story, I was surprised and surprisingly pleased that the author retained respect and some loyalty for the onscreen storylines while creating her own continuing story arcs.
That being said, I suspect I would have been far more critical of the book while the series was still on the air, so I'm glad I waited.  Now I may have to slowly but surely order the other three books available to see what I missed back then. 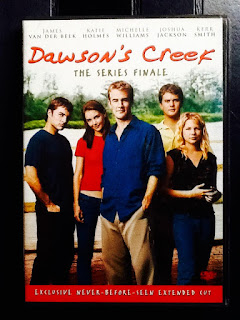 First, let's get this out of the way, I faithfully, and somewhat begrudgingly, watched Dawson's Creek from somewhere in the middle of Season Two (catching what I missed in reruns) to the series finale.  I couldn't stop watching, even as Season Three sucked the cleverness out of the series, which it never fully recovered from.  Even as I groaned in pain and yelled at the television screen.  Even as I asked myself, "Why am I watching this?"

The answer to that question is a combination of the consistency of the schedule (Wednesdays at 7pm Central) and the hope it would one day recapture some of the addictive magic of the first two seasons.  Before you roll your eyes...again...there was a scene early in Season Two where Dawson and Pacey are talking about girls while having their hair streaked in a salon, and at the same time Joey and her sister are talking about boys while changing a tire on a pick-up truck.  It was a brilliantly played reversal of stereotypical gender roles that did not contradict the nature of the characters, but sadly that cleverness faded away in Season Three...until the series finale.

In my personal opinion, the series finale captured that clever, fun spirit of the first two seasons.  Even if you didn't like that one of the four main characters died (I was ok with it because there was symmetry to the character's overall story), and even if you didn't like who Joey ended up with as the love of her life (I was pleased with her choice mainly because I had come to loathe the other option), the finale was well-written because the characters didn't behave out of character and the dialogue popped. (Thank you, Kevin Williamson)  Plus, there were some nice surprises, for example, the man Jack ended up with.

Second, let's get to the rule, because even though I thoroughly enjoyed the finale, I questioned if I suffered through too many seasons of pain and torture to make it worthwhile.  To make certain I would never willingly experience such concerns again, I came up with one simple rule that can be applied to any television series, scripted or otherwise.  I suppose it could also be adapted to include a series of films or books.

THE DAWSON'S CREEK RULE states that if you are yelling at the fictional characters and situations in a television series more than you are enjoying them,  you must stop watching immediately.

I have enacted this rule on a few series, including 24 and The Walking Dead.  Undoubtedly there will be more televised casualties in the future, but currently everything I watch is safe...maybe. 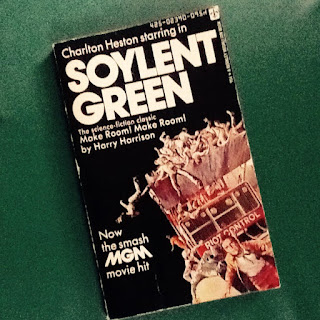 2016:  My sister finds a startling paperback novel on the library discard table.  The actual title is "Make Room!  Make Room!" by Harry Harrison, but it is probably better known as Soylent Green.

1999:  One wealthy man, of approximately 35 million people in the resource-strapped city of New York, is murdered.  One police detective, in the startling overpopulated world, is assigned to find out why the man was killed and who did it.

2016:  Knowing what we know about the film, my sister and I hungrily devour the pages.  Whether it is from our intense desire to see if what we know holds true in the novel or if it is from the book being old and well-read, each page literally falls out with every turn.

1999:  The months drag on as the police detective continues to investigate the murder, with one lead, but little luck.  Meanwhile Soylent burgers, Soylent steaks, and some green weedcrackers are devoured without question.

2016:  Drawing nearer to the end of the novel, my sister and I are on the edge of our respective seats.  We anxiously await for the significant moment when a certain secret is revealed, unleashing a horrible truth upon this literary world.

1999:  As the new century draws near, the police detective closes the case of the murdered wealthy man that nobody cares about anymore.  The world doesn't end, the population continues to rise, the Earth's resources continue to dwindle, and the green weedcrackers are seaweed.  Happy New Century!

2016:  Closing the book of now completely loose pages, my sister and I are stunned by this turn of events.  The wealthy man's murder was the result of a burglary gone wrong, not some cover-up concerning the weedcrackers, which are never once called Soylent Green.  "Make Room!  Make Room!" entertained and captivated us, but it was disappointing in the respect that...GREEN WEEDCRACKERS AREN'T PEOPLE!

That being said, we wonder if the screenwriter of the film was perhaps inspired by this one early excerpt from the novel that teased us with the tantalizing possibility... 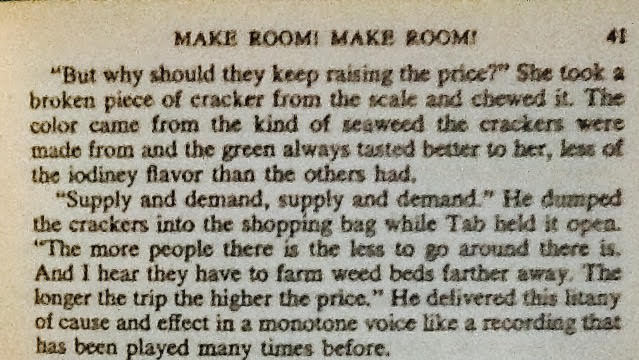 Freak Out,
JLH
P.S.  Please click “That ain’t no storm cloud!” to purchase and read a sci-fi/horror Amazon e-book about a town with a dwindling population!
Posted by John L. Harmon at 10:00 AM 4 comments: