I could rehash my so-called "accomplishments" of 2015, but my birthday vlog covers that area. (Click BROKEN RECORD if you want a repeat experience)

I thought about making a list of some of my favorite books, films, and such that I newly experienced in 2015, but that felt too much like a popularity contest.  (Though I will say that "Emoticons" by The Wombats was my jam!)

I decided to touch upon something I learned about myself this year.  It is something I've always known, but maybe never voiced to others, and barely myself.

I realized, or maybe have just come to accept, that my writing has to originate from an organic place.  What brought this to the surface was my idea of writing a collection of short stories of various genres suggested by other people.

It dawned on me that this was ultimately about trying to force myself to write, and that is not the way I've ever written.  My book/e-books, blog short stories, and other unposted/unpublished fiction started by accident. Something random, often a word or two unconnected to writing, triggered a chain reaction in my mind that possessed me until I finished.  Some have said my resolution of writing at least one blogpost a week is forcing myself, but I feel it is different beast.

I guess I could say I write on absolute feeling.  If I am feeling a project, then I'm like a madman with my writing.  On the other hand, if I'm not feeling it, well, I try to write, but ultimately the project gets put on the back burner.  More power to the writer who writes something every single day, because that is not who I am.

My apologies to anyone looking forward to my collection of suggested short stories, and to the ones who suggested the genres.  The First Genre and all the others have officially been put on that back burner for the foreseeable future.  I don't see it as giving up, but more as a wait and see situation.  It is rare, but a few past projects have been saved from burning into obscurity, so only time will tell.

That is all for this year.

No expectations.  No promises.

Interpret that however you see fit.


And thank you for reading my inane ramblings this year.  I sincerely appreciate it.

...because it brilliantly captures my mental mechanics, in my wholly biased opinion.
Posted by John L. Harmon at 8:11 AM 1 comment:

Offline, but not forgotten (Well, hopefully)

It wasn't my intention to stay offline for four full days...again.

Maybe I had planned to skip Thursday because my favorite Wi-Fi hotspot was only going to be open for two hours, and Grumpy Cat's Worst Christmas Ever was on.  Though if TLC were still with us, I would have been at the library for the full two hours.

Possibly Friday was going to be an offline day anyway because of all the hotspots being closed and it was far too cold to sit outside, even in a car.  Oh, and it was Christmas, which means food, family and Doctor Who.

If it hadn't snowed overnight and into Saturday, causing the morning to suck, I might have ventured to a particular deli hotspot for a couple of hours.  I was exhausted and didn't want to go anywhere, so my sis and I spent the afternoon watching Brokeback Mountain.

I seriously thought about going to my deli hotspot on Sunday afternoon, but I chose to see Star Wars: The Force Awakens again..  The geek is strong in this one, and I enjoyed it even more the second time around.

I must confess that I experience a certain amount of pleasing mental silence when I stay offline for a day or two or four.  I could have waited another day, or even until 2016, but I decided it was time.  Time to touch base with online friends/family who probably think I've vanished in some Nebraskan version of the Bermuda Triangle or been snatched away by He Who Walks Behind The Rows.

Pacing and Munching (or Answering an Answer)


I wish you could have seen me on Sunday morning, pacing back and forth from the living room to the kitchen, grabbing a handful of dry corn-based cereal, and back again.  Swallow, repeat as long as necessary, until thoughts have become organized, or at least coherent, and automatic munching is no longer required.

What, you may ask, set me off on a silent tangent of scattershot thoughts, handfuls of cereal, with a free hand waving erratically to give outside life to the rampaging words in my chaotic head?  A question.  A seemingly easy question posed to me by a fellow scribe, and through our fascinating Twitter conversation, we seemed to find the answer.

The question was, "...who is your target audience?"

The answer was ultimately, "Open-minded people."

Of course, I couldn't let that answer satisfy me for long.  I had to pick around its edges, cut it open to see what was inside, digging for more information, more details.  Searching for a more specific answer to the answer through crazy pacing, stuffing my face, and wild gesticulating.

My untethered thought process skipped and jumped around, attempting to examine why I would answer that my target audience is open-minded people.  What is it about my writing to lead me to such a conclusion?

Sure, there is the fluid sexuality in a couple of characters in DARK EXCURSIONS.  Not to mention the archaically modern microcosm the characters reside in.  I mean, in the literary world I created there is an electronically sealed door, but no mobile devices, yet there is at least one answering machine in existence.  Businessmen still carry briefcases, and at least 7 years prior to the beginning, there was an old-fashioned circus!  While I might not explicitly describe this circus, in my mind I pictured a caravan not dissimilar to what is seen in DUMBO or FREAKS.  Plus, the reader has to be open-minded enough to accept I never give a specific location or time for the story, or a name to the town/city that is the microcosm.

While in DARKENING STURGEONS, the town has a name, and while I don't say it, it is probably a safe bet Sturgeons is in the state of Nebraska in the U.S.  It is definitely a modern, small town setting with mobile phones and security cameras, and the sexuality of the characters are a bit more specific without giving direct words to note them.  How open does an open-minded person have to be to read and enjoy a story where quaint terms such as "straight" and "gay" are never uttered, but ends with (SPOILER ALERT) a man and woman kissing alongside two men kissing?  Plus, the reader has to accept the admittedly ridiculous solution to the mysterious disappearances, but I did originally conceive the story as a modern version of a 1950's American monster movie, so maybe it makes sense.

And then there is how discreetly I handle sex in my fiction, well, comparatively to other authors.  Not to mention a general lack of conversational cussing because I like to save swearing for emotional outbursts, not idle chit-chat.  I've had a different fellow scribe ask me if I was writing teen-lit, which made me laugh because some teen books I've read are more graphic than anything I've written.  Yet, I wonder if readers, even open-minded ones, are ever confused by the dichotomy of the liberal sexuality in my fiction combined with conservative storytelling.

And if I look at my known readers, who have expressed enjoyment of my writing, they are casually sprinkled throughout the spectrum.  Though, from what I've seen, my library readers seem to be Caucasian women of a certain age, but I can't honestly say DE was overly enjoyed by any of them, so I shouldn't base my reader barometer on those few.

Now, as I want to wrap up this rambling blogpost about my cereal-fueled self-examination, I wonder if I shouldn't try to specifically peg my readers.  A person can be open-minded about one topic, but shut down about another.  So maybe my target audience consists of various brave readers, from various backgrounds, with various interests, who are willing to take a chance on an unproven self-published author from a small town in the U.S.

P.S. Thinking about being obnoxious by including a link to other examples of my so-called writing at the end of each blogpost from here on out.

I am currently reading "Doctor Who: The Power of the Daleks" by John Peel.  It is a novelization of the second Doctor's first story.  The televised version is lost thanks to the BBC's lack of foresight of the rerun.

I am currently writing this blogpost.  I wrote a couple of pages of the First Genre, but stopped.  Maybe I'll get back to it.  Maybe I won't.  Maybe I have nothing left to write but the occasional blogpost.  It is a real possibility.

I am currently watching Scream Queens and iZombie, among other shows.  Scream Queens fills my Popular needs, while iZombie fills my Veronica Mars needs.  Though they are seriously entertaining shows on their own!

The Day I Ate A Tumbleweed

Approximately two weeks ago I answered a radio quiz concerning the board game Monopoly.  My prize was a certificate for a Tumbleweed at the Tumbleweed Cafe in Broken Bow, Nebraska!


And that is the day I ate a most delicious, and free, Tumbleweed!

P.S.  If you should find yourself at the Tumbleweed Cafe in Broken Bow, Nebraska, please abide by the parking regulations... 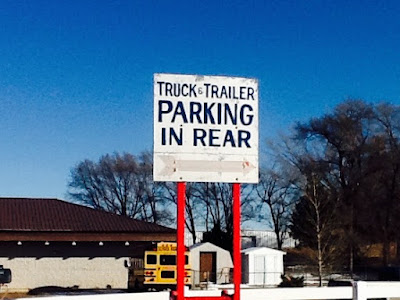 Words are devoured by my hungry eyes, as my heart races with each syllable.  How long have I spent in this book, with these characters? Hours?  Days?  Weeks?  Within the story, I've been with them for years, decades.

I have been enveloped in their joy, been drowned by their despair.  Their exquisite dream is my dream.  Their morbid reality is my reality. Connected through the threads of fiction, I greedily turn the pages of their complicated lives until I am confronted with the final leg of this literary journey.

The first page of the last chapter is before me, and I find myself hesitating. To finish reading the book means I will discover the fate of the characters I've come to know and love, but it also means I will be saying farewell to them and their surroundings.  With either choice there is potential heartache, so I must see it through to the end.  I owe it to the characters and their author.