I’m not sure if Prime Video recommended BLIND DATE because I’m visually impaired or because I’ve previously watched ‘80’s cheese.  Either way, I knew I was going to slide on my Mad Scientist Glasses to see what I would see.

What did I see?

I could clearly see Jonathan Ratcliff is a skeevy stalker.  After spotting blond bombshell model Rachel, he convinces himself that she might really be an old girlfriend who was attacked and institutionalized.  During one of his stalking excursions, Jonathon watches Rachel making out with a man in a car.  The man spots Jonathon and chases him through the woods.  Suddenly Jonathon is on the ground and then in the hospital with his eyes bandaged. 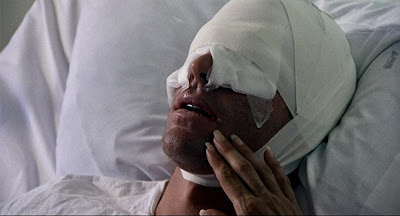 How many fingers am I holding up?

I paused the film and asked my sister what happened.  Jonathon ran into a tree limb or something and now he’s blind.  This is why I wear safety (dance) glasses when I’m out after dark.  So, I unpaused and could see Claire, Jonathon’s coworker/bedroom buddy/girlfriend, worrying about him as he deals with his newfound blindness.

One of the most realistic moments in BLIND DATE happens when Jonathon, completely frustrated at his lack of sight, grabs his stick and ventures outside alone.  In the early days of my chunk of vision loss, I experienced a similar need to do an everyday thing by myself.  Thankfully, my frustrated walk didn’t end with me being accosted on a subway platform by a goofier version of The T-Birdsfrom GREASE & GREASE 2.  My sister theorized that the three guys were just bored, rich, white kids pretending to be a 1950’s gang.  She was expecting them to pull out switchblades and start dancing.

After that weirdness, a doctor offers Jonathon the opportunity to see again, but only in computerized outlines.  There’s another catch, of course.  If the doctor implants the computer chip, Jonathon will lose all chances to regain his eyesight.  You see, the doctor claims there is no physical reason for Jonathon’s blindness, other than stupidity and voyeuristic pocket-pool, so this is a huge risk.  I honestly don’t know if I would take the chance, but Jonathon does.

Now only seeing life as vague digital sketches, with the aid of a Sony Walkman, Jonathon goes right back to stalking Rachel.  Somewhere along the way, he witnesses a murder.  This leads to a chase scene up a lot of stairs to the roof.  Somehow Jonathon doesn’t trip or fall and I call shenanigans.

Not only can Jonathon run around like he has 20/20 vision, he can also drive a car without even getting into a fender bender.  Plus, while his computer chip/Sony Walkman doesn’t allow him to read, he can now decipher a cursive handwritten note just by tracing the pencil marks with a finger.  He accomplishes all of this without any practice whatsoever!  At this point, I was rooting for the serial killer to kill everyone in the film.

Oh, did I forget to mention the serial killer?  Well, feeling like someone was flipping channels to a different film, there are multiple scenes where an unknown assailant stalks and kills dark-haired women.  No gore is shown because it’s really just an excuse to expose breasts.  Eventually, these two eye-rolling plots merge into a single ridiculous one.  The serial killer and Jonathon, failing to see eye-to-eye, face off for Rachel’s life near a swimming pool.  The male serial killer is running around in a Speedo, which is only fair after all the gratuitous boob shots.  #equality

BLIND DATE is a quintessential 1980’s flick.  Music, sex, glamour, computers, Atari video games, yuppies, Velcro shoes.  Honestly, some of it is so ‘80’s that it almost feels like a modern movie trying to capture the essence of the decade of excess.  Though I hope Jonathon’s hairstyle was a very short-lived phenomenon.

Joseph Bottoms, as Jonathon, is kind of believable as a creep stalker turned blind man, but fails to convince as a blind man turned action hero.  Kirstie Alley, as Claire, is easily the best actor in the bunch.  Too bad her character disappears for a large chunk of the film.  Lana Clarkson, as Rachel, doesn’t have much to do other than to look pretty and be stalked by our “hero”.  James Daughton, as Rachel’s boyfriend, is serviceable, but all I kept seeing was the “grain episode” of the 1974 PLANET OF THE APES television series.  Keir Dullea, as the doctor for Sony laboratories, is unfortunately forgettable.  Oh, and heads up to STAR TREK geeks, Marina Sirtis turns up as a victim of the serial killer.

As if all this wasn’t enough, my sister mentioned there was something during the ending credits about Jonathan Ratcliff returning in RUN, STUMBLE, FALL.  I immediately questioned if this happened, so I had to check IMDb.  For some unimaginablereason, this sequel never materialized, but we are living in the age of reboots, so there’s always a possibility.

In conclusion, I could easily see that BLIND DATE isn’t a great film, but I was somehow entertained by its preposterous plot, even as I was groaning and calling shenanigans at every turn.  The film moves right along and is good for a cheesy slide down a 1980’s tech-thriller rabbit hole.  However, I must give it an A for effort.  I mean, a blind action hero is a fantastic idea.  It just could’ve been done better, and maybe have a title that makes sense with the plot.