Inside Library John (July 2020 in Hindsight) 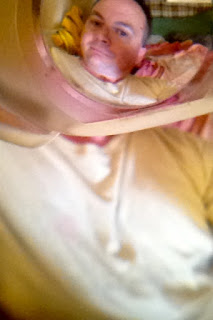 I'll blame the oppressive heat ofJuly for my lack of creative output.  That way I won't have to dig too deep into my own mind and its shortcomings.  Truthfully, I keep hearing a very logical voice advising me to give up.  I haven't yet, but I wasn't inspired to do a video for The FreakOptic Files this month.  Hope that's just coinky-dink. 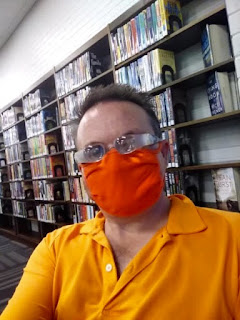 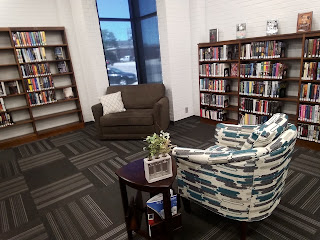 On a positive note, the library has reopened.  It was initially strange to once again be among the books I can no longer read, but it's beginning to feel natural again.  It's almost like the last 4 months never happened, with the exception of rearranged furniture and the front desk fish tank.  At any rate, downloading series & films from Netflix & Amazon to watch offline is so much more comfortable indoors.  Never mind there are now over 40 cases of COVID-19 in my county. 😬 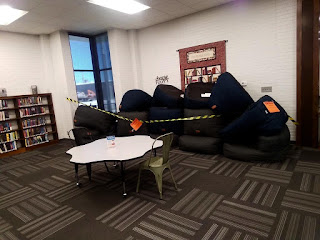 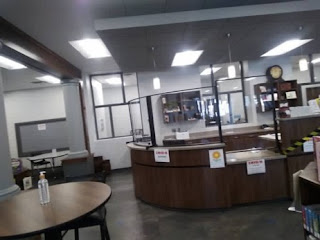 In other good news, a copy of DARK EXCURSIONS exists in the Northwest!  I don't know if this copy is now a coffee addict on a search for Bigfoot, but I hope its readers find something to enjoy.  They tweeted me a very nice pic of my difficult-to-photo book.  Seriously, the glossy cover has given me hours of photographic frustration 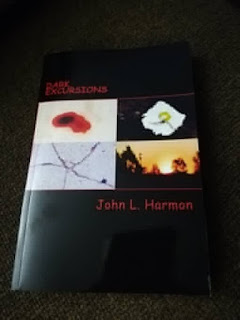 Oh, and Laszlo is getting bigger and bigger. 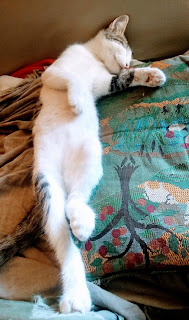 In conclusion, July has been a bit of a teeter-totter month.  I'll be fine as long as the person on the other end doesn't jump off while I'm up in the air. 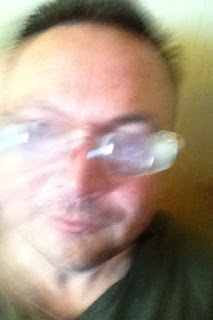 Catch me in August!

P.S. I wrote what might be one of the more important posts for this blog in July...
https://freakboyzone.blogspot.com/2020/07/walking-after-sundown.html 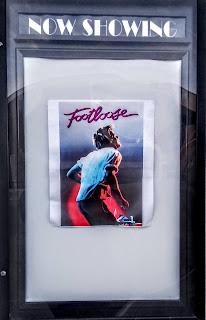 As a 1980's kid, who watched plenty of teen flicks, how did I miss FOOTLOOSE?

Was I too busy playing with my Kenner STAR WARS action figures?  Did some of the R-rated movies I  probably should not have seen make FOOTLOOSE look juvenile?  Was I against really bad dancing?  The answer to this rad filmic mystery is simple.  The idea of a bunch of late-teens not being allowed to dance seemed, like, totally lame to my 10-year-old brain.  So, the years rolled on and I missed FOOTLOOSE on VHS, Laser Disc, DVD and even streaming.

Now, 36 years later, I decided to cross FOOTLOOSE off my list of unseen 80's films.  Thanks to COVID-19 shutting down Hollywood, I was able to experience this tale of teen rebellion on the big screen for only $2.

The plot is right out of a song.  A rebellious big city boy moves to an oppressive farming community.  He meets a small town girl with a death wish, who is also the preacher's daughter.  This boy and girl fall in love and just want to go to prom. The problem is that this small town banned dancing when a drunken car crash, after a dance, killed a bunch of teens.  Will the boy and girl fight against school bullies and Bible-thumping adults for their right to party-hardy?  Will the preacher stop being such a buzzkill?  Will somebody call an ambulance out of fear that the big city boy's dancing is actually an undiagnosed medical condition? 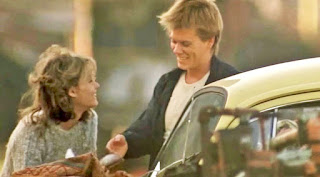 Seriously, how the hell did Kevin Bacon become famous?  His acting is a standard teen flick performance.  (Did he learn nothing about the thespian art from FRIDAY THE 13TH?)  His dancing is embarrassing.  (Was it improvised on the spot?)  His smile is consistently a lecherous leer.  (He obviously wants to do the Horizontal Bop.)  Plus, his character's name is Ren, as if the audience needs more of a reason to hate him. 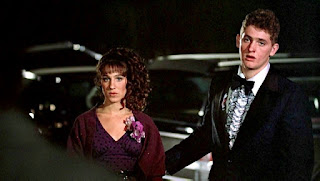 Lori Singer, as the preacher's daughter, is forgettable.  I can't even recall the character's name.  Christopher Penn, as Willard, Ren's new small town friend, is stupidly likable and made me think of Joshua Jackson in DAWSON'S CREEK.  Sarah Jessica Parker, as Rusty, the preacher's daughter's best friend, livens up any scene.  John Lithgow and Dianne Wiest, as the fire & brimstone preacher and his quietly powerful wife, give this film credibility that it doesn't deserve. 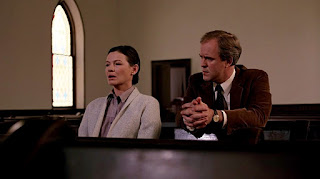 Strangely, I may have missed the film back in the day, but I owned a cassette tape of the FOOTLOOSE soundtrack.  So, sitting in the theater in 2020, I was eagerly waiting to see how certain songs would be used in the film.  A few musical interludes surprised, confused and impressed me. 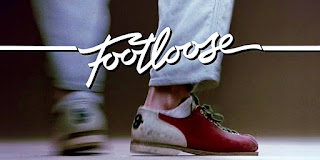 I give props to any film confident enough to open with the title song over a montage of dancing footwear.  I wonder how many people left the theater early back in 1984 because they got what they wanted from the beginning credits.

"Holding out for a Hero" by Bonnie Tyler 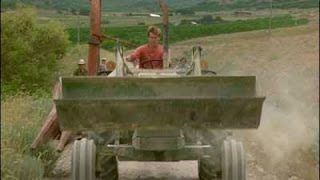 I was experiencing such fits of hysterics watching a game of chicken played with tractors that I'm surprised someone didn't accuse me of dancing like Kevin Bacon.  I seriously can't decide if this scene is the dumbest thing ever filmed or if it is satirical brilliance because holding out for a tractor chicken hero is ridiculous to the extreme.

"Let's Hear it for the Boy" by Deniece Williams 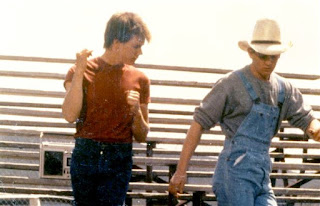 I legitimately enjoyed the use of this crazy-catchy song.  Willard confesses that he can't dance, so Ren teaches him how to dance, or whatever Kevin Bacon is doing.  This joyous scene surprised and impressed me from start to finish.  Showing two men dancing together in a 1984 film, without obvious, hateful  jokes, is the cinematic equivalent of giving the finger to that generally repressive, homophobic decade. 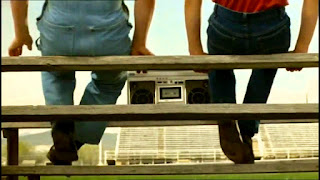 While Ren and Willard are just friends, my mind envisioned a modern day remake.  A rebellious big city boy moves to an oppressive farming community.  He meets a big sack of duh boy who can't dance because the town has banned dancing.  Will the rebel teach the big sack of duh how to dance while fighting school bullies, Bible-thumpers and their growing attraction to one another?  The answer is yes and they embrace their feelings through a kiss and a dance  at the underground prom, while a cover of "Let's Hear it for the Boy" by Beyoncé plays on!  Somehow I suspect this is not the plot to the 2011 remake, but it should be.

In conclusion, I believe my 10-year-old self would have been bored by FOOTLOOSE because, with a few exceptions, my adult-self was bored during it.  However, I'm glad I can cross this off my unseen 80's films list.  Hopefully COVID-19 keeps the classics coming to a theater near me.  Maybe I'll finally see FLASHDANCE!

A sandwich special side
Of sweet potato fries

You look like an abomination
To my half-blind eyes 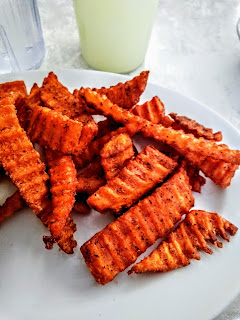 P.S. A different poem about a different meal...
https://freakboyzone.blogspot.com/2020/04/soul-searching-breakfast-pastry-micro.html 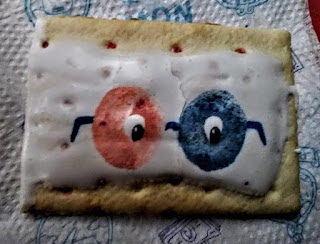 How often, during my Omaha days & nights in the late '90's/early 2000's, did I get a late-evening hankering for some Lay's Sour Cream potato chips and Ben & Jerry's Peanut Butter Cup ice cream?  Too many times to count, and no I wasn't pregnant.  I'd slip on my boots and walk many, many blocks to the heart of my downtown existence...The Old Market.  There was a little market/gas station that I frequented because it was closer than any larger grocery store.  I would purchase my unnatural, but tasty, junk food combo cravings and traverse the night back to my apartment.  And don't get me started on the countless times I put on my boogie shoes, walked to the clubs, and danced the night away. Stumbling through the streets at 1 or 2 in the morning to crash into my single occupancy bed was a sometimes chaotic, but good time in my younger life.

Flash forward to the last few years and I'm still walking the streets at night.  No, I haven't started my post-pandemic career...yet.  When my sister and I were delivering two different newspapers, she would drive to a nearby town to retrieve one, while I sometimes delivered the other.  I can't drive, so I would lug two grocery bags of rolled-up newspapers through the dark, early morning streets of my small town.  In the winter, with my heavy coat, stocking cap, and a scarf wrapped around most of my face, I looked  like a tick about ready to pop.  Sometimes I would walk on the sidewalks, sometimes in the streets, but I kept my damaged eyes as peeled as possible for unexpected obstacles such as tree branches or rocks.  When one of the newspapers switched to mail delivery, my walking after sundown decreased, which has given my half-blind eyes more important things to focus on.

In August 2019, a young man named Elijah McClain was walking home from the store one late-evening in Colorado, a state adjoining mine.  Someone called the police to report a person behaving suspiciously.  The police arrived, immediately confronted the young man as if walking down the sidewalk with a grocery bag was a felony, and then used excessive force to restrain him.  A few days later Elijah McClain died as a result of this assault.

How often did I walk down sidewalks in the dark while carrying a grocery bag?  Why did I never get reported as a suspicious individual when I behaved far more suspiciously than Elijah McClain?  Why didn't the police stop me to see what I was doing walking in the dark?  Why am I not dead after a confrontation with police?

Comparing my experiences with his, the answer to these questions is obvious to me.  It's because I am white and Elijah McClain was black.

Elijah McClain should still be alive but the system meant to protect and serve killed him because of the color of his skin.  Until the system is repaired, the healing of this country cannot begin.  This is one of many reasons why Black Lives Matter.