For a long time I didn’t know much about him, other than he was a director who wore women’s clothing.  Then I saw Tim Burton’s loving bio-pic, but figured there was more to the story.  Over the years I heard of a darker, depressing side beyond his compulsively watchable low-budget films.  Finally, I read THE book and was faced with the startling truth from the eccentric folk who survived this exuberantly tragic ordeal.

Can your heart stand the shocking facts about…NIGHTMARE OF ECSTASY (The Life and Art of Edward D. Wood, Jr.) by Rudolph Grey?!?! 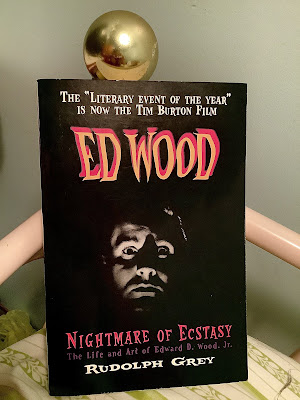 Reading this book in the same method as when Andy Milligan changed my life, I was initially confused by hearing a person’s name before each paragraph.  I quickly realized this wasn’t a typical biography written in the author’s words.  NIGHTMARE OF ECSTASY is the story of Ed Wood as told by the people who knew and loved him, despite his faults or maybe because of them.  Each chapter is chock full of breathtaking memories and highly amusing anecdotes from his widow Kathy, his mom Lillian, actress Maila Nurmi (Vampira), actor Paul Marco (Officer Kelton) and so many others from Ed’s quirky entourage.  Personally, I think stories from and about PLAN 9 FROM OUTER SPACE actor John “Bunny” Breckinridge and alleged psychic Criswell stand out in a most horrifyingly hilarious way!

That alliteration might be the best overall description of this book.  It has the joyous, can-do spirit found in Tim Burton’s ED WOOD (1994), but also digs beneath the surface.  In NIGHTMARE OF ECSTASY, you will learn aspects of Ed’s life that you might not want to know.  I’ll spare you specific spoilers, but be prepared for an emotional roller coaster ride.

While I was extremely entertained by the behind the scenes craziness during production of his celluloid wonders, I was seriously drawn to the intriguing fact that Edward D. Wood, Jr. was also a novelist!  Instead of sequels to his films, he wrote trashy pulp fiction meant to shock and titillate.  Tragically, most of his bibliography is out of print and expensive to purchase.  Thankfully, a few books have been reprinted and I ordered DEATH OF A TRANSVESTITE, originally published in 1967.  I am eager to read it, but worried I’ll be disappointed.  Out of all the jaw-dropping titles, I wasn’t able to locate either of the two I most want to read.  Hopefully some daring publishing house reissues 1967’s DRAG TRADE and 1971’s TO MAKE A HOMO.  Hey, a queer freakboy can dream!

In conclusion, if you are interested in Ed Wood, obscure Hollywood or “the unknown, the mysterious, the unexplainable,” then Criswell predicts you will slip into your best angora sweater and cozy up with NIGHTMARE OF ECSTASY!

Can you prove that it wouldn’t happen?!?! 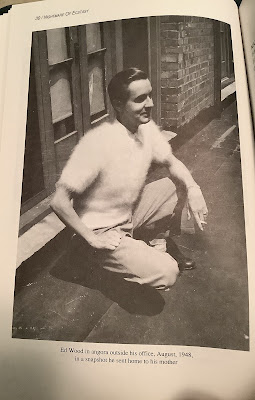 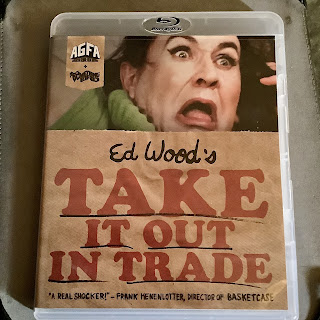