My sisterand I finished reading THE SCARLET PIMPERNEL novels.

I subscribed to NETFLIX, and man did I enjoy it!

My eyesight took a downward spiral.  My left eye has been steadily failing in the last two weeks.  My right eye is dubious  at best, but it's keeping me from running into walls for now.   I have an optometrist appointment scheduled.

Until I sort this vision situation out, if it can be sorted, this will be my final tale from the freakboy zone.  The last couple of posts have been typed  with great difficulty and really large text size.

I will also be MIA in various social media platforms.  I hate abandoning my vast lifeline to the world, and I would love to say I'll check in, but that remains to be, well, seen.

My old blogposts will still exist, along with DARK EXCURSIONS and DARKENING STURGEONS.   I can't deprive potential new readers the pleasure and pain of whatever the hell my so-called writing is.

In conclusion, I sincerely thank you for all the support over the last few years.

The TV Freak: THE CURSE OF LOGAN 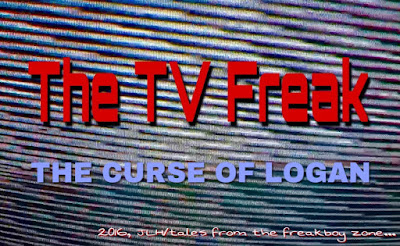 Seriously, when did Logan become the go-to name for rich, white jerks, who also happen to be a love interest for the main character?

I was really hoping Gilmore Girls: A Year in the Life would reveal this Logan perished in a gruesome yachting accident.  Tragically he is still alive and continuing to be a smug, arrogant jerk who doesn't care about the consequences of his deplorable actions.  Unfortunately, if there are more episodes, we will all suffer the consequence of Logan probably being the father of Rory's baby.

This Logan seems to be a parody of all other rich, white Logans, so I don't necessarily hate him.  I'm just glad Kimmy saw Dong for the sweet man he is and showed Daddy's Boy Logan out the door.   I hope he doesn't return any time soon, but I still have 2 episodes of the first season and all of the second season of Unbreakable Kimmy Schmidt to watch.  I guess I'll find out soon enough. 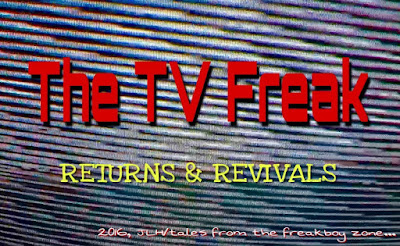 First, yes, December's blog theme is television.  If this offends your delicate, highbrow senses, then stop reading this and continue to look down upon the world from your hypocritical ivory tower.

Second, yes, I finally took a sip from the streaming punch and subscribed to NETFLIX.  What did it take to pull me, at least temporarily, into the 21st Century?  The answer is two films (Pee Wee's Big Holiday and Mascots) and two series...

GILMORE GIRLS: A YEAR IN THE LIFE - Admittedly, I'm not a longtime, die-hard fan of the original series. It wasn't even on my radar until last year when a friend heavily suggested I watch.  Thankfully, ABC FAMILY/FREEFORM was showing repeats, so I watched with severe skepticism.  The quirky small town characters quickly won me over, so I knew I would want to see what happens next.  As for the new episodes, I am halfway finished and overall I am enjoying them.  Emily Gilmore is the real reason to watch, which doesn't surprise me at all.

STRANGER THINGS - I've been told this show is right up my alley.  I haven't watched any episodes yet, but I've liked Winona Ryder since Lucas and Heathers, so I suspect I'll enjoy this series.
If I have time, I hope to squeeze in some Unbreakable Kimmy Schmidt and Black Mirror.  I say if I have time because I'm not certain I'll continue past the free first month.  Without Internet or wi-fi at home, I don't know if I can justify even 10 dollars a month.  Though, before logging offline yesterday, I noticed it appears there are some series and films that can be downloaded to watch offline.  If this is true, then my one month decision may be in a state of flux.

I guess only limited time will tell.

P.S.  Click NOVEMBER to read the post that inspired December's theme.
Posted by John L. Harmon at 8:19 AM No comments: