I started this blog five years ago today and I don't know what to say about it.

I just hope I've entertained you with my nonsense, which was one of my original goals.

Thank you for giving me your time over the last five years, and here is to five more.  (clinks imaginary glasses with you)

I am the sound of distant thunder, the color of flame...

When I first heard that someone, somewhere created a musical from Stephen King's seminal novel of teen angst telekinetic tragedy and/or Brian De Palma's brilliant cinematic adaptation, I rolled my eyes in disbelief.  My incredulous mind conjured up song titles such as They're All Going To Laugh At You and Plug It Up.  It just seemed utterly crazy to my extremely closed attitude, so it didn't surprise me to hear how it had been a massive Broadway bomb.

Years went by and I forgot about the shock of such a brave or stupid spectacle, until I signed up for a 3-month free trial of Apple Music.  I was searching for the soundtrack to the 1976 film, which was a ridiculous thing to do since I already owned a copy of the CD, when I stumbled upon a 2012 revival soundtrack to CARRIE: THE MUSICAL.  My mind reeled.  I never thought I'd want or get a chance to experience this infamous pop culture infusion of horror-suspense and song, but there it was, literally at my fingertips.  I held my breath and let the streaming begin.

"What the hell am I listening to?" was my initial reaction to the emotional chaos of IN, the opening number.  Then slowly, much like Carrie White's burgeoning telekinetic powers, my enjoyment manifested and grew.  After the back-to-back whammy of tracks 5 and 6, I was hooked. 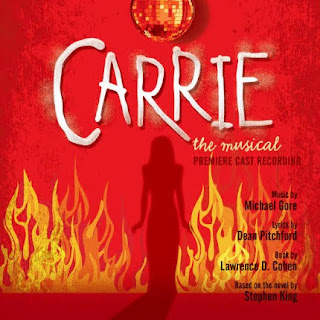 THE WORLD ACCORDING TO CHRIS is the villain's song, which is often a highlight in musicals, and this proves to be no exception.  It's a wickedly catchy anthem glorifying bullying and intolerance.  This ditty is so politically incorrect that it almost slides into camp until the final, haunting moments, which seem to speak volumes about our world today.  The world according to Chris is better to whip than get whipped...even if somebody bleeds, please, nobody dies from a scar...and that's the way things are.

EVENING PRAYERS is a beautiful mother-daughter duet that surprised me.  Typically Margaret White is portrayed strictly as a religious zealot, but this song captures the real love she has for Carrie, though it's buried under her extreme beliefs.

There are so many great, memorable songs to be found in CARRIE: THE MUSICAL, and when I finished that initial listen, I knew I would be listening to it again.  What I didn't foresee was that I'd eventually purchase a copy (thank you, Dave & the late Carrie Fisher) and how it would help me struggle through the early days of my chunk of vision loss.

I  imagine you're raising an unbelieving eyebrow.  Well, one thing CARRIE: THE MUSICAL vividly captures is the emotional mess of being a teenager.  Needless to say, I was an extreme emotional mess in late 2016 and early 2017, so I related to the whirlpool of feelings behind the lyrics.  I found a safe and effective way in dealing with my anger, frustration, fear and sadness over the unstoppable change in my life.  I was Carrie White in the shower, terrified of what my body was doing without warning, seemingly without explanation.  There's a movement in my head...Saints and Angels, what can it be?  It's growing...it's stirring...it's churning...shifting...bending.

This is why I believe CARRIE: THE MUSICAL is better than its reputation suggests and should be given another chance.  Hopefully the recent spectacular episode of RIVERDALE inspires another revival.  Maybe a touring production so this Nebraskan freakboy would have a realistic chance of experiencing these songs of endless wonder live on stage. 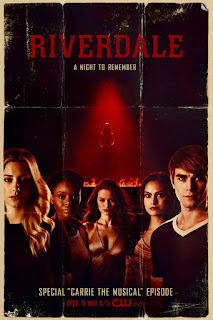