"Perverts and sluts!  They are doing everything they can to take him away from us." - Aunt Cheryl

I had never heard of this film, until I noticed, via Twitter, that Turner Classic Movies would be showing it for their TCM Underground, which typically airs on Friday night/early Saturday mornings.  TCM Underground has introduced me to some great little films.  I'm an early riser, so I may or may not have accidentally on purpose woken an hour and a half earlier than usual to catch this obscure cinematic gem.

From the terrific title alone, I was expecting a trippy, surreal, pre-Nightmare on Elm Street exploration of night terrors.  I was wrong. What I got was a psychological, pseudo-slasher film siphoned from the vein of Psycho.  If Aunt Cheryl ran a motel, this could nearly be a prequel to Alfred Hitchcock's masterpiece.

Poor little Billy (Jimmy McNichol, borrowing his sister's hairstyle) lost his parents in a very spectacular and extremely suspicious car accident and had to be raised by his doting and lonely Aunt Cheryl (Susan Tyrrell, forever altering how I view Cry-Baby).  Billy, on the other hand, has grown into a not so lonely young man.  He has a sweet, caring, patient girlfriend (a pre-Newhart Julia Duffy) and he knows he can always rely on his coach (Steve Eastin), who wants to see Billy get into college on a basketball scholarship.  Life seems pretty good for Billy until Aunt Cheryl asks him to contact the repairman so their television set can be serviced.

Aunt Cheryl, all dressed up and ready for love, is hoping the TV isn't the only thing to get serviced.  She literally throws herself at the repairman who refuses her voracious advances, finally shoving her away.  Well, Aunt Cheryl will not be ignored.  She reacts very negatively by grabbing a knife, killing the repairman and then claiming he was going to rape her.

Billy, who witnessed the murder, believes his aunt.  A police detective (Bo Svenson), on the other hand, does not.  The detective discovers an inscription on the repairman's ring which romantically links the deceased with Billy's basketball coach.  In the detective's mind, Billy killed the repairman in a lover's quarrel and Aunt Cheryl is covering for her nephew.  The extremely homophobic police detective refuses to believe any other scenario, even as evidence to the contrary and dead bodies begin piling up.

There are lots of twists and turns and familial revelations before the story concludes in a shockingly impressive way for the notoriously homophobic decade of the 1980's.  SPOILER: the police detective is NOT the hero of the film and Billy justifiably shoots him dead.  I give credit to the lingering effect of the 1970's, that magical decade where it seemed that Americans were making a real effort to understand and maybe even accept one another, at least on television and in the cinema.

I rarely say this about a film, but maybe it's time for a remake.  A contemporary version could more honestly explore Billy's sexuality and what skeletons may be lurking in the detective's tightly sealed closet.  A fresh look could also tighten up the script a bit and give a little more insight into Aunt Cheryl's delusional mind.  Yet, perhaps these aspects are best left for the audience to ponder after the final credit rolls.

BUTCHER, BAKER, NIGHTMARE MAKER isn't quite the groundbreaking psychological suspense-horror thriller that it could've been, but it's worth watching.  So, relax, pour yourself a glass of milk and enjoy this tale of love, loneliness, hate and serious family dysfunction.

For more information on VISION BENT, please visit The JLH Collective...
https://thejlhcollective.blogspot.com/2019/01/vision-bent-half-blind-poems.html
...or an AMAZON near you...
getbook.at/VBebook 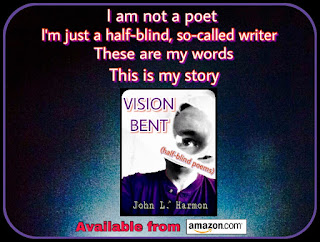