freakboy on film: AN AMERICAN WEREWOLF IN LONDON ("I know what scares me..." Edition)

“A naked American man stole my balloons.”
-Little Boy in the park


I could go on and on about how brilliantly clever An American Werewolf in London is.  The screenplay by John Landis gives the classic horror conventions a modern flip with humor, gore and sex, but with emotional emphasis on the characters.  The director, also John Landis, keeps the story visually moving with some crafty special effects and POV werewolf shots, plus he gets some terrific performances from the actors.

I could fill up this post about the great cast.  David Naughton brings an endearing charm as David Kessler, the somewhat naïve American with lycanthropic tendencies.  Jenny Agutter manages to make Alex Price, an overly trusting nurse, believable with some no-nonsense sweetness.  Griffin Dunne is the perfect comic relief as Jack Goodman, the decomposing undead friend popping up to give such heartwarming advice as encouraging David to commit suicide.

Instead, for October's blog theme, I want to focus on one particular scene in An American Werewolf in London.  A scene that traumatized me as a child and took me years to watch in full.  A scene that still causes me to emotionally curl into a ball, hold my breath and have flashbacks of being so scared as a child that I would run out of the room when that scene started.

The scene starts with The Muppet Show, where Miss Piggy and Kermit are, ironically, discussing the violence in a Punch and Judy puppet show.  It is quickly revealed that David's younger brother and sister are watching this on TV, while his dad reads the newspaper and his mom is preparing supper.  David is sitting at the table doing homework when there is a knock at the door.  His dad opens the door to what is surely one of the most violently disturbing scenes in a horror film up to this point in time.

An army of assorted ghouls are at the door with machine guns.  These creatures immediately mow down David's dad.  One of the ghouls holds a knife to David's throat while he watches his mom get killed in the kitchen.  Then, with one last glimpse of The Muppet Show, a particularly demonic ghoul aims his machine gun and blows away David's younger brother and sister.  As if this wasn't enough, the ghouls start setting the house on fire, and ultimately slit David's throat. 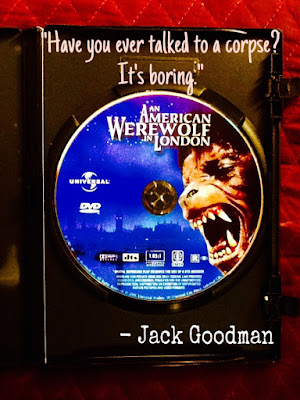 As a 9 or 10 year-old boy, this dream/nightmare sequence seriously freaked me out.  I remember being absolutely terrified of watching The Muppet Show for quite some time afterwards because I knew a gang of ghouls would burst in and kill me.  The first time I watched an episode again, I kept turning around and staring at the front door, waiting for a knock to begin a bloodbath.


It took me nearly two decades to watch this scene in full.  I had been told by my sister that the ghoul slit David's throat, but I never watched that far into the scene.  After seeing David's family being killed, I covered my ears and closed my eyes the first time I saw the film, and would, upon later viewings, leave the room the second the nightmare started.   I think, when I was younger, I felt that seeing David's dream death would be one horror too many for me.  So, it was either out of bravery or masochism that I finally sat down to experience it all.

Well, it was a two-minute endurance test.  The scene still disturbed me, but seeing the final moment wasn't as horrific as I imagined.  For years I had pictured a waterfall of blood spewing from David's throat, but the cinematic dream reality was less gory.  Then David woke up in the hospital and everything was fine, until Nurse Alex walked in and pulled open a curtain!  I never knew that David's ghoul nightmare was a double whammy and I fell for it.  My fear, and my sister, managed to keep this secondary scare a secret from me, which still amazes me these many years later.

In hindsight, I should have never been allowed to watch An American Werewolf in London at such a young age.  Though, it wasn't my parents who allowed it, but my sister, who loves this film.  It also amuses me that the werewolf violence never overly bothered me, but that one short scene caused years of fear.

So pop some popcorn, sit back and watch one of my favorite funny, scary, traumatic horror films, but remember...

"Stay on the road.  Keep clear of the moors." - Dart Player

P.S.  Click BOO for a Halloween trick or treat!