My excursion to Dairy Queen was filled with suspense.  Was the wrong circle going to get punched?  Was I going to have a Blizzard meltdown if such an error occurred again?  Which Blizzard was I going to order?

I decided not to be obnoxiously superior by refraining from stating the date as I handed the DQ clerk my card.  Though, I really may have to start being that kind of person.  The clerk had to examine my DQ VIP Card and remark, "It's not March."  I quickly explained, out of fear, how someone messed up last week and punched a circle in April.

Thankfully, the correct circle was punched...this time.  We shall see what happens when I use my free, manager-altered coupon later this week. 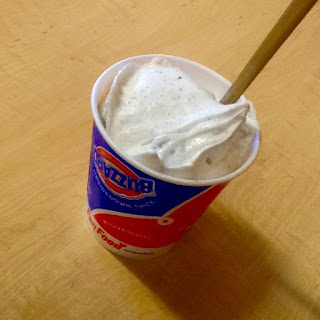 The Royal Oreo Blizzard was way better than it looked.  Those Oreo cookies were so blended in that my half-blind eyes simply saw vanilla ice cream.  That specific Oreo taste, coupled with the hidden treasure of a blob of seriously delicious chocolate in the center, gave the vanilla ice cream a Royal treatment.  By the way, I licked the Golden Spoon clean!