I recently asked my online friends, Why do I want to see Pitch Perfect 3?  I explained that I never saw the second one because the first one caused me such severe pain that I turned it off after 20 minutes.  It might have been less than 20 minutes, or maybe more.  Either way, time slowed to a death crawl.  The only reasons I tried watching the first PP was Rebel Wilson because she cracked me up in her brief appearance in BRIDESMAIDS, and Anna Kendrick because she was awesome as a backstabbing ALL ABOUT EVE character in the tuneful CAMP, but even they weren't enough to keep me watching.  So, why in the name of Todd Solondz would I want to see the third film in this popular, mainstream series?

One friend was logical and mentioned that the minds behind the trailer did their job well.  Another friend suggested insanity, which is what I'm leaning towards.  Whatever the reason behind my cinematic desire, I caught a Sunday afternoon matinee and I was entertained. 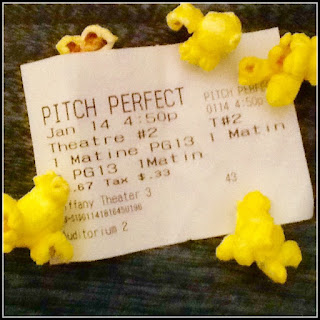 Yes, the plot, if you can call it that, is incredibly thin and utter nonsense, but thankfully the borderline satirical screenplay is aware of what it is.  I give co-screenwriter Mike White credit for this.  The Bellas, out of college and in the real world, are not adulting very well.  A misunderstanding brings the group back together for one final singing competition.  Will the Bellas be chosen to open for the music powerhouse behind the scenes?  Will Fat Amy reconnect with her questionably good father?  Will Beca perform that super annoying, because I couldn't flip on the TV without hearing about it, cup routine from the first film?  Will John and Gail steal every scene?  Does any of this really matter?

Not really.  Deep, personal character development that makes you ponder the meaning of existence is not what PP3 is about.  This is a popcorn film to the extreme...and it's a lot of mindless fun.  I literally laughed out loud on many occasions.  Especially due to Rebel Wilson as Fat Amy, John Michael Higgins as John, and Elizabeth Banks as Gail!

Excuse me for a moment as I veer off into a cinematic tangent.  Has Elizabeth Banks and Parker Posey ever appeared on screen together?  If not, why not?!?!  In my opinion, these two women have a similar screen presence.  I would LOVE to see them playing relatives in a gritty, but hilarious indie film about life, love and whatever they want as long as Banks and Posey are allowed to shine!  (To learn about my total worship of Posey, please read... http://freakboyzone.blogspot.com/2016/06/freakboy-on-film-party-girl.html )

Back to PP3.  If I have one complaint, it's that John Lithgow, a proven comedic genius, is utterly wasted as Fat Amy's father.  He was amusing, but he was probably doing the best he could with the one-dimensional character he was handed.

Anyhoo...thank you for reading or listening to my half-blind, filmic words.  Now sit back with some butter-drenched popcorn and escape reality with the silly fun of PITCH PERFECT 3!  (Honestly, I'd rather watch it again before suffering through the unmitigated crap-storm of THE LAST JEDI for a second time.)

Oh, and one more thing.  Even though I was entertained by PP3, I have absolutely no desire to see PP2 or to give PP a second chance.