It was bound to happen...

Thankfully my sister was with me and noticed the careless error, so I could mention it moments after it happened.  The clerk went to the manager and the situation has hopefully been resolved.  I was given a coupon for a free Blizzard to replace the misplaced punch.

I said hopefully because I fear this year-long Blizzard ice cream dream will snowball into a melted nightmare.  Future DQ clerks might be accidentally drawn to the rogue April punch and take out the circle next to it before it's time.  I may have to start specifying which week's Blizzard I'm there for.

Me, next week:  "Hello.  I'm here for my free small Blizzard for the week of February 19th."
(points at the correct circle)

I'm also worried about the coupon.  First, it's going to throw off my weekly blogpost, but I'll just do what I did with the first two Blizzards.  Second, the coupon is technically for a free mini-Blizzard.  The manager crossed out the m-word and wrote in small.  Then she initialed it.  Hopefully the next clerk will recognize and honor this coupon.  I plan to use it next week to avoid more confusion.

This means next week will be two Blizzards!  What will I do during the Blizzard-less week of April 9th?  That remains to be seen. 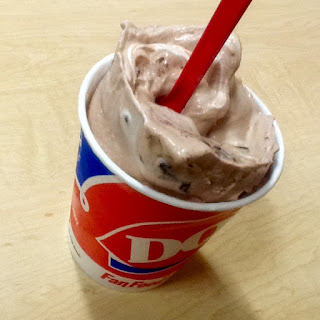 The Chocolate Xtreme Blizzard was delicious!  If you don't like chocolate, you better avoid this Blizzard.  Creamy chocolate ice cream with chocolate bits, chocolate chunks and swirls of chocolate sent me into a chocolate state of euphoria!  This will definitely be a Blizzard I revisit, hopefully under better circumstances.