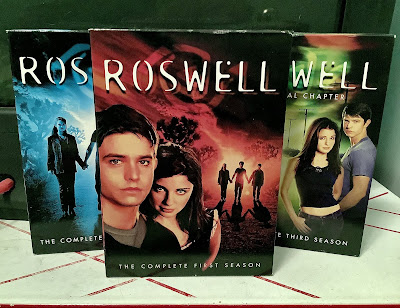 Hello, my name is John and I’m a teen drama addict.

Oh, I was a hardcore WB network junkie back in the day.  From Buffy the Vampire Slayer to Angel to Dawson’s Creek to Popular to Grosse Pointe, I couldn’t stop!  So it was fate, and absolutely no surprise, that I was in the middle of rewatching ROSWELL when Rebecca of Taking Up Room announced The Fake Teenager Festivus Blogathon!  Thank you for perfect timing, Rebecca! 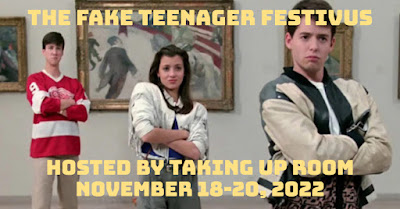 Speaking of perfect timing, Liz Parker (high school science major by day, waitress by evening) is lucky that Max Evans (high school student by day, half-extraterrestrial by genetic design) was at the Crashdown Cafe when she was accidentally shot.  Max used his alien powers to save Liz and turn her life topsy-turvy!  Now Liz, along with best friends Maria (Jetta driver by day, aspiring musician by night), Alex (lovesick goofball by day, suave romantic in dreams), and ex-boyfriend Kyle (former football jock by day turned Buddhist by Zen), must deal with mysterious government agents, out of this world threats and other teen aliens.  Max isn’t the only one in town.  There is his sister Isabel (perfect student by day, Christmas Nazi at holidays), their friend Michael (less than perfect student by day, screw-up by day and night), and eventually Tess (new student by day, manipulator by choice).  The half-aliens were in the infamous 1947 flying saucer crash and incubated in pods for decades, so they carry a lot of baggage and backstory.

ROSWELL aired for two seasons on the WB network and then for one season on UPN.  Both of these networks eventually combined to form the CW.  Anyhoo, the first season is a great mix of teen angst, humor and low-key sci-fi, and I still very much enjoy it.  The second season amps up the sci-fi stuff and isn’t quite as focused, but is still entertaining and better than I remembered.  The third season starts off all wannabe edgy, probably as a result of the different network, but eventually gets back to the heart of the show, which is the complicated but caring relationships between the alien and human teenagers.

Speaking of teenagers, while not as painfully obvious as other shows, there are plenty of fake ones to be found.  Shiri Appleby as Liz Parker, Katherine Heigl as Isabel Evans, Brendan Fehr as Michael Guerin, Nick Wechsleras Kyle Valenti, and Colin Hanks(yes, Tom’s son) as Alex Whitman were all in their early 20’s when ROSWELL hit the airwaves.  Depending on lighting and camera angle, they are sometimes believable early on, but one among them is not.  The most obvious fake teenager award goes to Jason Behr as Max Evans, who was clearly 25 during the first season.  However, I must give ROSWELL props for a couple of real teenagers in the cast.  Majandra Delfino as Maria DeLuca and Emilie de Ravin as Tess Harding were 18, though they were in their early 20’s by the final season.

Much like other teen dramas from that era, the acting is good but not always great.  The same can be said for some of the storylines.  Though all in all, interesting and likable characters lifts ROSWELL above other teen dramas.  In fact, it was good enough to receive a remake series on the CW titled ROSWELL, NEW MEXICO (2019-2022’, which I also recommend.  No fake teenagers can be found because the characters are all adults, but there’s enough residual teen angst vibe to please fans.  Plus, it has a natural inclusiveness that the original series would have probably not been allowed to explore.

One reason I enjoy ROSWELL, both then and now, is the relatable quality of how the aliens often feel like outsiders.  So, if you’ve ever felt that way or you’re addicted to teen drama like me, then grab some Tabasco sauce because ROSWELL may be the television series for you!  I mean, you can’t go wrong when “Here With Me” by Dido is the theme song!

P.S.  Click the pic ⤵️ for an older post about seriously fake teenagers and the dangers of jazz… 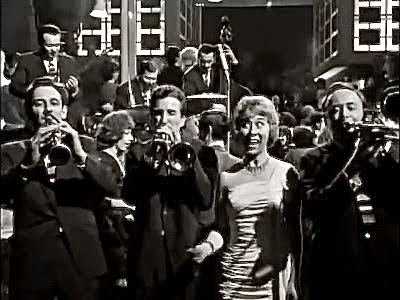 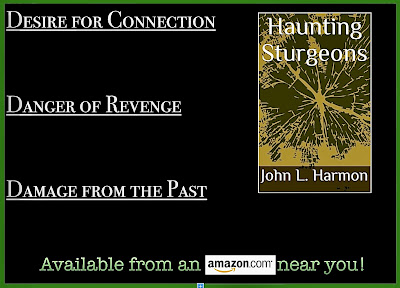