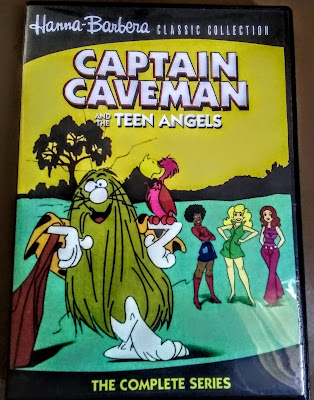 I was a very young freakboy when CAPTAIN CAVEMAN AND THE TEEN ANGELS originally aired on ABC, but vague memories have stuck with me throughout the years.  I wanted to know why I remembered anything at all, so that's the reason I decided to relive my Saturday morning childhood on DVD.  All I needed to complete the flashback was Aquaman Underoos and a big bowl of Quisp cereal. 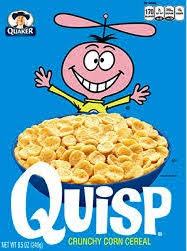 There was an epidemic of mystery-solving teens in the 1970's and I was not immune to their kitschy charms.  I must have been catching the tail-end of this genre of animated series because the formula was set in stone by the time CAPTAIN CAVEMAN AND THE TEEN ANGELS came along.  A group of teenagers travel around solving mysteries with the help of an offbeat sidekick.  Some groups had a scaredy-cat dog, a blathering shark, a sputtering buggy or even a funky phantom, but the Teen Angels had a superhero caveman.
"Set free by the Teen Angels from his prehistoric block of glacier ice, comes the world's first superhero, Captain Caveman!  Now the constant companion to the Teen Angels - Brenda, Dee Dee, and Taffy - in their hilarious, and sometimes scary mystery missions.  Get ready for Captain Caveman and the Teen Angels!"

The opening narrator (Gary Owens) tells you all you need to know about the main plot, but what about the characters?  Dee Dee (Vernee Watson) is the super smart Teen Angel, often finding and connecting the clues.  Brenda (Marilyn Schreffler) is the scaredy-cat of the group, often shaking at the thought of a mystery.  Taffy (Laurel Page) is the master trapper, often planning elaborate methods to capture the villain.  Last, but not least, there is the very hairy Captain Caveman (Mel Blanc) who often loses his powers at the most inopportune times. 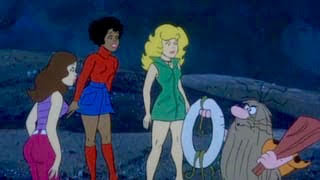 Watching CAPTAIN CAVEMAN AND THE TEEN ANGELS with an older and allegedly wiser mind was a different experience.  The series lacks the magic spark of SCOOBY-DOO, WHERE ARE YOU! (1969-1970) but it is a fun, and often silly escape.  However, there is something there, hiding just beneath the surface, or maybe in Cavey's roomy hair, which leads me to one question.  Who are the Teen Angels and Captain Caveman really?

I believe it's time for Cartoon Network or Boomerang to answer that question in a new series.  They could create a darker, emotionally complex, but still kid-friendly update in the vein of the brilliant SCOOBY-DOO, MYSTERY INCORPORATED (2010-2013).  The new Captain Caveman series could explore how the Teen Angels stumbled upon his block of ice.  Were they in the middle of solving a mystery at the time, and what's going on with all the mysteries anyway?  The group seems to randomly stumble upon crime after crime, but the narrator calls them mystery missions.  Missions?  Are the Teen Angels working for the government or Charlie?  Are they even aware of a possible outside force  directing them to the mysteries?  Then how does Captain Caveman fit into the overall picture and what is up with his powers?  Especially his ability to store and retrieve extremely large objects and creatures in his hair.  Is Cavey an anomaly?  Is he reaching into time when he pulls out dinosaurs from his hair?  It's mind-boggling and a little disturbing.  Sadly, Cavey, Brenda, Dee Dee, and Taffy may never get the chance to solve the bigger mystery surrounding them. 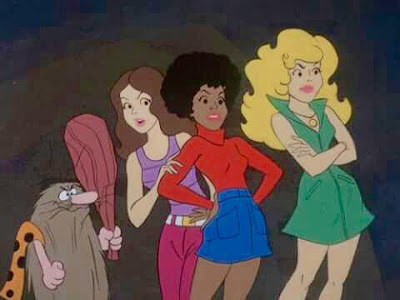 In conclusion, ZOWIE!  CAPTAIN CAVEMAN AND THE TEEN ANGELS is a trippy trip back to the late 1970's.  No, it's not the best of the multitude of mystery-solving teens out there, but It's underlying weirdness is why it never fully left my memory.
Thank you for reading or listening to my half-blind words.
Freak Out,
JLH
P.S. Travel back to the early 1990's...
http://freakboyzone.blogspot.com/2020/11/channel-freakboy-eerie-indiana-1991-1992.html
~~~~~~~~~~~~
February's Collective Eye is a-rockin' with the wicked-cool

of ‪BRICKLAYER BOSH, so DO come a-knockin'!!!