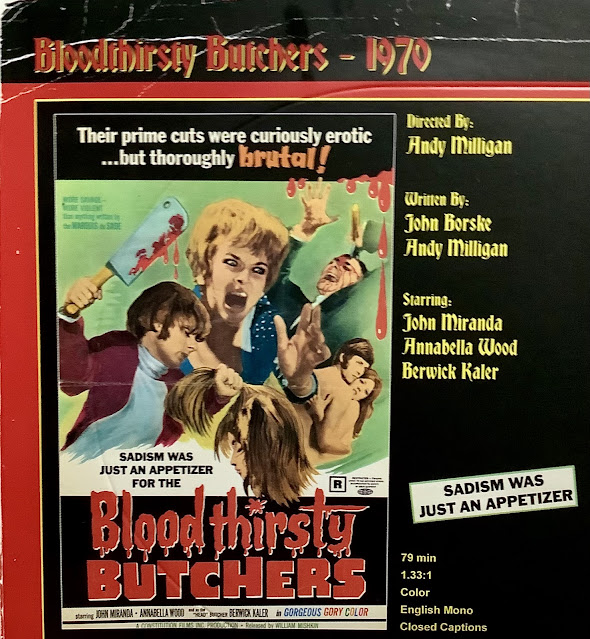 I guess you could call me a Sweeney Todd fan.  I have experienced the stage musical twice and I enjoy the Tim Burton film, even though it doesn’t compare to the energy and thrill of a live performance.  So, I was intrigued and excited when I discovered Andy Milligan wrote and directed a non-musical version of the gruesomely amusing Todd tale.  Though, I would love to see Milligan on Broadway!  Can you imagine the corrosively crazy vibe his material would bring to The Great White Way?

Anyhoo, my initial viewing of BLOODTHIRSTY BUTCHERS was on a cheap DVD and it left me more than a little baffled.  I found the story to be more disjointed and confusing than usual for a Milligan film and I kept wondering if there was going to actually be blood in BLOODTHIRSTY BUTCHERS.  I didn’t hate it, but I was disappointed.

Then I experienced the posthumous “director’s cut” on The Dungeon of Andy Milligan box set and a scarlet veil was gradually lifted from my half-blind eyes!  There was more gore and I came to understand and even revel in the character-driven plot.  Milligan chose to focus less on the people being baked into pies and more on the relationships and romantic entanglements.  Seriously, it is best to have a working knowledge of the story before watching or you might get confused very quickly.

In BLOODTHIRSTY BUTCHERS, nearly everyone is unhappy in their relationship.  Sweeney Todd, besides giving customers a severely close shave to steal their expensive trinkets, has to deal with an alcoholic wife and a difficult showgirl mistress.  Never mind his relationship to Mrs. Lovett.  Maggie Lovett, besides baking Sweeney’s customers into scrumptious pies, has to deal with her invalid husband and a couple of debatably good employees.  Tobias Ragg, besides butchering Sweeney’s customers for Mrs. Lovett’s pies, has to deal with his demanding girlfriend and then make time to harass his coworker Johanna.  Johanna Jeffrey, besides being a shopgirl for Mrs. Lovett, has to help with taking care of Mr. Lovett while pining for her love Jarvis to return.

Jarvis eventually returns and life seems happy for Johanna.  Well, until he flashes a piece of jewelry for his beloved in front of Sweeney.  Now Jarvis is missing and the community is becoming increasingly suspicious of two local business owners.  Seems like a lot of missing folk were last seen getting a trim from Mr. Todd.  It doesn’t matter that it has mainly been beggars, thieves and prostitutes disappearing.  They are still people.  Then there is talk about the declining quality of Mrs. Lovett’s pies.  Apparently most people are disgusted to find a chunk of human hair in their pie or even a woman’s breast popping out from under the crust.  Tobias has grown careless in his work, which leads to a power struggle between the three bloodthirsty butchers!  Who will live?  Who will die?  Who will be baked into a pie?  My hungry lips are sealed!

BLOODTHIRSTY BUTCHERS is one of Andy Milligan’s British films and, despite my initial reaction, he is in top form.  Unconventional pacing and editing, including the “swirl camera” to represent out of control violence. ✅  Personal rants disguised as overly theatrical dialogue. ✅  Corrosively cynical characters who are generally horrible to everyone. ✅  Occasional doses of acidic humor, especially when Mrs. Lovett helps a customer who wants a specific “part” in his pie. ✅  All of this adds up to a delirious, delectable low-budget grindhouse feast that only Andy Milligan could serve us.

He also served up some fascinating performances.  Jane Hilary gives the strongest performance in the film as the sly Mrs. Lovett.  Berwick Kaler sheds the sympathetically pathetic persona of his NIGHTBIRDS character to become believably creepy and repulsive as Tobias.  John Miranda is effectively domineering as Sweeney Todd.  Annabella Wood and Michael Cox as young lovers Johanna and Jarvis give the weakest performances, which makes sense in a Milligan film since love is often shown as frivolous, if not pointless.  Though I must give a special shout-out to George Barry as a drag performer who works with Sweeney’s showgirl mistress.  Corky will never win RuPaul’s Drag Race, but the character lights up the room and may be the kindest soul to ever grace a Milligan film.

Despite my less than thrilling first experience, BLOODTHIRSTY BUTCHERS has steadily grown on me with repeat viewings.  That is one thing I’ve learned over the last couple of years.  The more times you watch a Milligan film, the more you come to appreciate and embrace his uniquely off-kilter vision.  Well, except for maybe SURGIKILL, but that’s another post for another time.  Anyhoo, if you are in the mood for some bloody British horror through the lens of a 42nd Street American grindhouse director, then pop in a beef pot pie and savor the flagrant flavor of Andy Milligan’s BLOODTHIRSTY BUTCHERS! 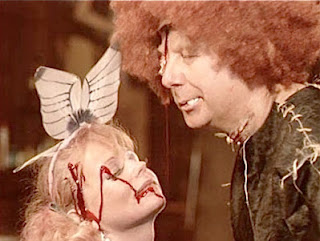