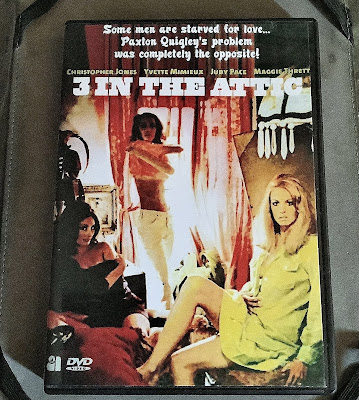 Unlike many of the crazy films I’ve experienced over the last year, this one did NOT ping onto my radar through my Andy Milligan obsession.  Instead, I must thank the cheesy, far less sexy Vampira/Elvira knock-off named Svengoolie.  I was watching his horror movie show on ME-TV when he got to my favorite part…the cast!  He talks about the various film and television roles the actors are best known for since it’s probably not from the wonderfully schlocky movie he’s showing.

I can’t recall what film Svengoolie was presenting, but he mentioned Judy Pace was in the controversial film THREE IN THE ATTIC.  My interest was peaked by the title and the word controversial, so I grabbed my phone and searched IMDb.  Here is what my phone read to me….

“When three coeds discover that the campus Casanova is dating them

all at once, they lock him up in an attic and take turns having sex with

him…to drain the stud of his potency.”

I started laughing, perhaps inappropriately.  Then I asked the world, in a most incredulous tone, “How have I not heard of this film?”  In the days that followed, I watched the trailer and searched streaming sites.  I found it listed on Epix, but instead of subscribing, I decided to look for a physical copy.  There was one very inexpensive DVD on eBay, so I snatched it up without a second thought.  Maybe it was a hunch that THREE IN THE ATTIC would be my bag or perhaps I really do have a filmic problem.  Either way, I took a breath and popped in the disc.

The IMDb synopsis is basically spot on, but there’s a little more to it.  Big stud on campus Paxton Quigley, who even gets his own theme song*, meets Tobey.  Tobey is an intellectually driven young woman from a nearby women’s college .  This unlikely pair seem to fall in love and their future looks bright.  That is until Tobey’s parents butt in, causing friction between the lovebirds.

Maybe this is why Paxton Quigley is seduced, his words, by another young woman from the same college as Tobey.  Eulice is an artist looking for a good time and a subject to paint, both of which she finds in Paxton Quigley.  He puts the ass in class as he takes Eulice to a cheap motel he frequents so often that he receives a discount.

As if Paxton Quigley wasn’t already a big enough dirty-ho-playa’, he has a collision with some flowers and yet another young woman from  the same college as Tobey and Eulice.  Janet is a new age hippie-chick looking for inner peace while indulging her id.  She nearly doesn’t fall for the so-called charms of Paxton Quigley until he claims to be queer.  It’s 1968, so of course Janet must use her womanly flower power to “save” him.

Tobey, Eulice and Janet do not know about each other’s involvement with the same man because Paxton Quigley has a hook-up schedule, which also includes watching Bonanza on his day of rest.  His bed-hopping goes on for a while, but Paxton Quigley eventually seems to want to give up his philandering ways and settle down with Tobey.  Tobey, however, has other plans.

The three women have figured out what’s been going on, so they do what anyone would do.  Lock the scoundrel in an attic and give him exactly what he wants.  Yes, Tobey, Eulice and Janet take turns having sex with him.  What seems almost like a titillating prank turns dark when Paxton Quigley goes on a hunger strike.  Will Paxton Quigley be the first casualty of the sexual revolution?  What is Tobey, Eulice and Janet’s end game?  You’ll have to watch to find out.

Yvette Mimieux is intense and complex as Tobey, especially when the attic plan is set into motion.  Judy Pace is fun and fierce as Eulice, especially when she’s being sexually aggressive.  Plus, she gets the best line in the film… “True love just makes me sick.”  Maggie Thrett is trippy and a bit crazy as Janet, especially when she’s in full-tilt new age hippie-chick mode.  Christopher Jones is frustratingly likable as Paxton Quigley, even when he’s being an utter creep.  This is probably because he emanates a chilled James Franco vibe.

Director Richard Wilson does a serviceable job.  There are some interesting visuals, especially in a dream sequence.  Though generally the look of the film reminds me of made for television movies from the 1970’s, which is not a complaint.  Low-budget and unpolished holds my attention.  What also held my attention is the story.  Writer Stephen Yafa creates four memorable main characters and an intriguing premise.  The plot slows down a little in the middle, and maybe doesn’t dig quite as deep as it could, but the story has enough controversial situations and dialogue to keep things interesting.  Honestly, it is probably more controversial in 2022 than it was in 1968.

In conclusion, THREE IN THE ATTIC is not for everyone.  I enjoyed it because the story is a step off the beaten path and it’s not to be taken too seriously.  The amusing animated end credits of a couple discussing the film illuminates the satirical edge.  So, if you want something a little different, put some flowers in your hair and experience THREE IN THE ATTIC. 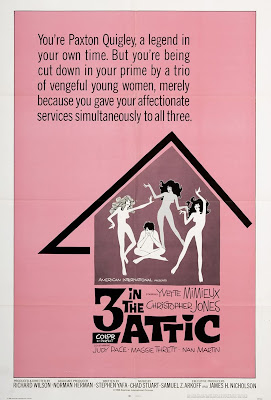 P.S.  THREE IN THE ATTIC was the second place winner in a Twitter poll I conducted to decide which film I should review now that my blog serial is over.

So click the pic ⤵️ for the third place winner… 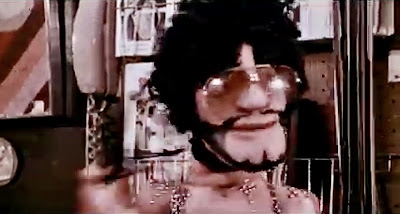 …and click the pic ⤵️ to learn about the first place film… 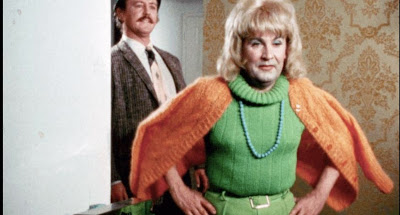 Click the pic ⤵️ to read my blog serial… 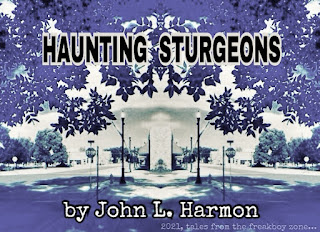