I kneeled at the edge of the field and prayed to He Who Walks Behind The Rows for the corn to protect my small town from the Coronavirus.

While COVID-19 has hit the state of Nebraska, it has yet to leave its calling card in my town.  I pretend we are safe because of being somewhat isolated from bigger cities while being keenly aware that my town will probably become the cruise ship of the Nebraska plains.

Yeah, I'm worried, but no more or less than I'm worried about catching the flu.  I'm probably more concerned over the aftermath of this pandemic.   Will the corporations and the government (same difference) use the virus as an excuse to force us into a fully cashless society?  Will post-Corona paranoia permanently destroy print media?  If (and when) the latter occurs, what will become of my sister and me?

We are some of the last in the dying breed of newspaper carriers.  Sure, subscriptions have dropped over the last 15 years and the remaining customers are probably either senior citizens or Jumble addicts, but this bug could expedite the demise of printed news.

My sister could probably return to the food service industry, if dining out continues to be a thing.  I'm not sure surrounding my half-blind eyes with searing hot grease, boiling water and sharp knives would be ideal.  Though, kudus to the visually impaired thrill-seekers who love the dangers of restaurant work.

I could rely on my books, but 7 years has taught me otherwise.  Maybe the local truck stop has an opening  for a daytime hooker, but I might be too old to enter the world's oldest profession.  Perhaps I could become a middle-aged, half-blind, orange underwear supermodel.  I could strut my stuff on the runways of Asia and Europe until becoming Patient Zero in the next pandemic.  Then the history books will finally fulfill my post-apocalyptic fantasy of being called Infectious John.

Putting aside my cavalier American attitude, these are some real concerns I've had in my head for longer than COVID-19 has existed, but I'm a Nebraskan.  Generally speaking, we aren't prone to mass hysteria, except in the case of drones, and we ultimately figure out what to do in the end.

Stay safe out there and please wash your hands now and forever after, especially men.  I cannot tell you how many times I've heard a guy using the urinal in a public restroom and not wash his hands when done, but that's another post for another day.

P.S.  My dystopian future paranoia of a cashless society...
https://freakboyzone.blogspot.com/2019/12/dystopian-future-paranoia-or-how.html
~~~~~~~~~~~
😷Self-Quarentine😷 with an e-book or two...or six! 😉
viewAuthor.at/JohnLHarmon 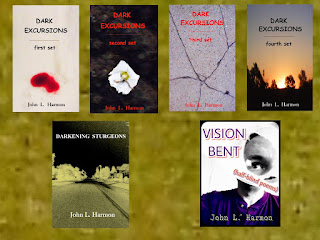