It was the night before the frozen TV dinner incident and John found himself alone at a Super 8 Motel on the outskirts of Lincoln, Nebraska. Having just purchased an overpriced bottle of green apple scented shampoo, he settled in for the night.

John had finished reading Stephen King's 'Salem's Lot just before sundown and he wasn't ready to visit that chilling, heart-stopping village again so soon, especially after dark.  Flipping through the cable TV channels, he wasn't finding any program to hold his interest.  Then a random question, born out of a want for entertainment, popped into his mind.

What is on MTV nowadays? John thought, and immediately switched to that channel.  He hadn't watched MTV for several years, not since Just Say Julie stopped airing, and he wasn't an avid radio listener, so he wasn't completely sure what to expect, musically speaking.  Relaxing in bed, he mentally prepared to be annoyed and/or disappointed.

This was a time when MTV actually played long stretches of music videos.  A time before so-called "reality television" had fully grasped the public consciousness and strangled the entertaining life out of many cable channels.  John leaned back and watched and listened to music that he didn't hate, but didn't love either.  That is until a certain song visually and audibly focused his attention.
To John, this video, with its lurid colors and freaky-costumed children, was bizarre and interesting.  His initial opinion of Only Happy When It Rains was that it seemed to be mocking whiny, oh-my-life-is-miserable songs by embracing and rejoicing in the misery.  Even the band's name, Garbage, seemed to him to be a winking smirk at other bands and the music industry in general.

The video ended and John quickly scribbled the pertinent information down on a motel notepad.  After another half-hour or so, he decided that was enough MTV for the night.  Alone, with joyful misery pouring down on his mind, he was soon ready for bed.

As soon as possible the following morning, John found himself at a Blockbuster Music on 48th & O.  The clerk had never heard of Garbage and seemed skeptical of John's music knowledge, but checked to see what was available.  Tragically, there was no full album listed, but there was a CD single available, which surprised the clerk and pleased John. 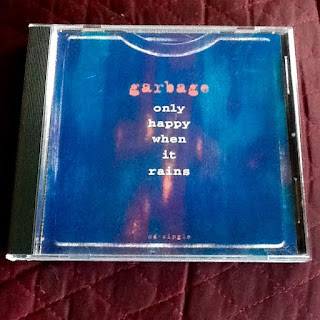 On another day at a Target in Kearney, Nebraska, John would find a copy of their self-titled debut album, sealing his fate as a fan of Garbage.  Until then, he left Blockbuster Music in Lincoln, Nebraska, Only Happy When It Rains clutched in his excited hands, and made his way to his next destination.  There, waiting just for him, was the frozen TV dinner incident...but that is another tale for another day.