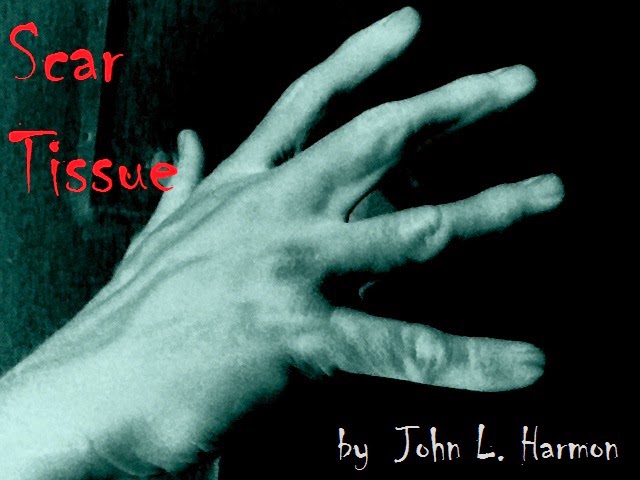 "Working late again tonight, Professor Danton?"
He turns away from the agitating illumination and locks the laboratory door, hoping the night watchman isn't in a talkative mood.  His frame of mind of late cannot tolerate useless chatter.  Especially after a long day at the university.
"Still making up for lost time, Frank."
This simple answer, as the professor quickly discovered, extinguishes prolonged conversation.  People generally become mute when faced with an uncomfortable topic.  Frank, the night watchman, is no exception, waving him off with a 'good-night' and a sympathetic look.

Once home, the professor visits his private bath to wash his hands, not for the first time today.  His soap-lathered fingers rinse clean, but that does not stop him from another scrubbing.  While drying, he stares deeply into the mirror, the signs of sleep deprivation heavy on his countenance.  Even with such a reflection facing him, he convinces himself, once again, that he is doing the right thing.
In the candlelit dining room, at the end of the long table, he finds his wife waiting for him.  No matter the hour, she has supper ready and waiting, as if nothing is wrong, as if tragedy never occurred.  The painful irony of this behavior is it emphasizes the tragedy and how wrong it made everything.
"You mustn’t keep waiting up for me, Elizabeth."
"We are still a family, Victor, and families dine together."
Her sweet voice, so beautifully certain and sadly faded, grasps his heart, daring him to confess all.  As much as he longs to tell his beloved wife the truth behind his long hours, he cannot.  Not yet, but his encounter with Frank and now Elizabeth's fragile state convinces Victor that sooner will be better.  Unfolding his napkin, he glances at the empty place setting situated halfway between them and makes a decision.

Victor Danton walks cautiously among the dimly-lit hallways, leading a shadowed figure hunched over and wrapped in an overcoat.  Not since the first day he brought him here have the hallways of the university felt so endless and treacherous to him.  His dark eyes are alert for the slightest movement, his sharp ears listening for the faintest sound.
The apparent emptiness of the area could lull him into a false sense of security.  He could allow his mind to wander.  Wander to his wife sitting alone at their long dining room table.  Her dark brown hair loosely swept back, her gentle face full of beauty and sadness, waiting for him to arrive home.  Unsuspecting of his nightly activities, for it is not how her innocent mind works.  Elizabeth Danton is a trusting soul and he has never given her a reason to distrust him, until recently.
A startling illumination stops him so near the exit that he can nearly touch the door, "Professor Danton?"
"Good Evening, Frank."
"Evening, Professor.  Is everything all right here?"
"Everything is fine, Frank.  I am assisting this student back to his dormitory."  Victor, sensing the night watchman's doubt, leans forward and whispers, "Intoxicated."
Frank seems to be weighing the situation for an eternity before finally replying.  "I bet it is girl trouble.  You remember how it was at that age."
"Completely," Victor lies.  Dusty books and intense studying filled his university days.  Elizabeth was thankfully a persistent woman, slowly becoming fully ingrained in his mind and heart.
"Well, better get him to his room before he's dead to the world.  Need any help, Professor?"
"Thank you, Frank, but I can manage."
Victor falls into silence until they are immersed in the safety of night, leaving behind the science building and Frank's inquiring light.  Then, with only the sound of their mingled footsteps and the thudding of his own anxious heart in his ears, he leans close to the hunched figure.  "We shall be home soon, Henry."