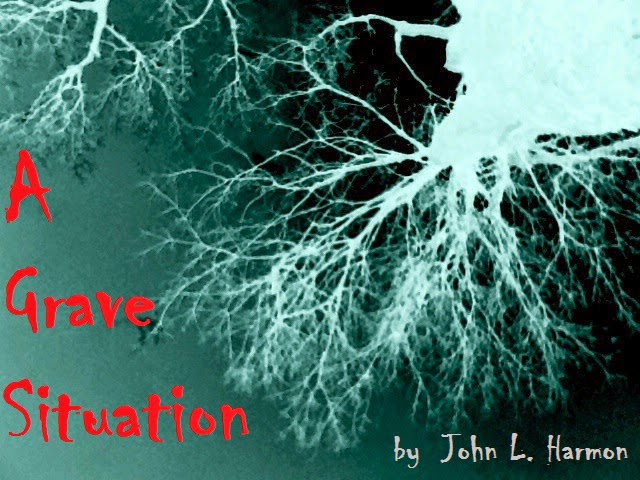 He opens his eyes to dirt and darkness, but it's not darkness to him.  Each speck of dirt pressing against his hazel eyes can be seen and that's not all.  Surrounding him on all sides is life.  Underground bugs and deep burrowing earthworms, yet, there is something else.  Something waiting.  This knowledge, and an aversion to the slithering, crawling lower lifeforms, propels him upwards.
A seemingly endless amount of dirt collapses upon him as he digs toward the surface.  There is no sensation of claustrophobia or suffocation, just a feeling of someone waiting.  He isn't sure how he knows what he knows, especially since his memory is in question, but he knows it to be true.
Sunlight greets him as he pulls himself out of the dirt.  No, not sunlight.  Moonlight, yet he can see the surroundings clearly, as it the land is highlighted by the noonday sun.  Peculiar indeed, but what shouldn't be peculiar is where he now finds himself.  Headstone after headstone after headstone for as far as his extraordinary eyes can see.  He knows what he is, but not how he came to be.
"Well, I was beginning to think dawn would break before you decided to come topside."
He turns to the somewhat sarcastic feminine voice, to the one who has been impatiently waiting for him.  She is sitting on top of an old massive headstone, managing a look of extreme interest and exquisite boredom.  Her hair, tied back in a ponytail, is natural sexbomb blond and her vaguely smiling lips are as red as, well, blood.  A stunning figure cuts beneath the seemingly inappropriate nighttime cemetery-wear of a peach sundress.  Long, slender legs swing back and forth, as the backs of sturdy peach sandals bang against the name of Victor Danton.  Somewhere from the depths of his murky memory, he finds his last words.
"You saved me?"
Victor Danton receives a reprieve as her peach sandals come to a halt.  Typically the first words out of a newbie's mouth are "what happened" or "I'm thirsty" or just a stupidly confused moan.  This one must be something different, at least compared to her previous attempts.
"Technically, I did save you, so to speak."
He reaches into the murkiness once again, sifting through fleeting images, words and emotions, until he finds confusing truth.  Multiple vacant eyes approaching, staggering, mouths agape.  Dropping his weapon, giving up on the situation and life in general.
"I didn't want to be saved."
"True, you didn't seem to desire a rescue," she nearly whispers, vividly recalling the sullen moment.
A few questions come to mind, but he chooses the first, "Why did you?"
Her peach sandals begin kicking the deceased Danton again, with a nervous verve.  "I was thirsty and bored.   Why did you want to destroy yourself?"
Snippets of images illuminate through murky memories.  A building, full of them, whoever 'them' are.  Sitting in a pick-up truck with...someone.  Then a voice, not his own and almost inaudible, "One more and then it will be time."  Suddenly, a blinding flash, followed by an overwhelming sensation of nothing to live for, nothing to push him forward.
"I was alone."
"You were and now you are not."  She gracefully dismounts the headstone, ponytail swishing, and draws closer, fascinated by her handiwork.  "What else do you remember?"
"Jumbled images."  He looks down and notices his distinct attire.  "Was I a soldier?"
"Every human is a soldier now.  Thankfully, they are not after the likes of us."
"What are they after?" he asks, curiosity peaked.
"The living dead."
"Isn't that what we are?"
"No.  We are the undead.  Zombies are the living dead."
He recalls his suicide attempt full of vacant eyes and gaping mouths and then studies the admittedly pale, yet vibrant creature before him.  "Shouldn't we be the living dead?"
"Living dead, rotters, zombies.  Undead, nosferatu, vampires.  Whatever.  I blame the movies."  She would roll her eyes but this is the most meaningful conversation she has experienced in...well, quite a while.  "Speaking of semantics, do you remember your name?"
Several monosyllabic noises are made in frustrating attempts to conjure an answer to her seemingly simple question.  He finally gives up, shrugging his shoulders, "I don't know."
"Your memory may fully restore itself or not.  Difficult to say for certain.  It is different for everyone."  She seems completely unconcerned, stepping closer and offering to adjust his disheveled collar.  "We are undead during the zombie apocalypse, so we can be whomever we want.  Just pick a name."
"What's your name?"
"Peaches, currently."  Her smile is simultaneously warm and wry.
Inspiration strikes quickly and he smiles in return.  "Cam."
She nods in approval.  "So, Cam, I trust that I don't have to hide any sharp wood from you or that you won't decide to sunbathe come morning?"
Newly-christened Cam briefly recalls the crushing emotions as the living dead closed in and then locks vivid eyes with his maker named Peaches.  "As you said, I am no longer alone.  And neither are you."
Peaches quickly links arms with her perceptive prodigy.  "Now let's get you cleaned up and find you someone to drink, which is not as easy as it used to be with this new world order."
As she casually leads him away from the soulless cemetery, a lone zombie staggers quietly in the distant moonlight.