I received an alluring e-mail from Amazon during the midst of my Saturday Morning Mid-Life Crisis.

Swingin' Single Animated Series Are Waiting To Meet You!
Ok, maybe it didn't say exactly those tempting words, but I had to look.  Nothing was catching my half-blind eyes until I fell under the spell of SABRINA THE TEENAGE WITCH.  (IMDb was sketchy on the years this aired.  It was either 1969-1972 or 1971-1974.)  I had no idea there was an older animated version, but I wanted to see it!  No, I needed to!  So, with only a moment of hesitation and without checking You Tube for episodes or clips, I ordered an inexpensive DVD. 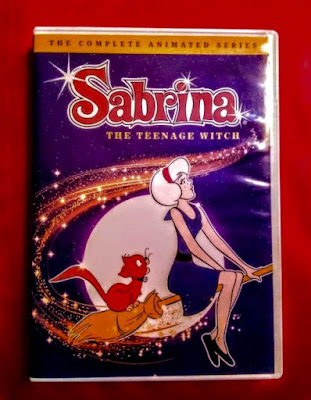 What was I thinking?
I wasn't thinking.  I was a junkie haunting the back alleys of Toon Town, jonesin' for my next Saturday morning fix.  A little jingle jangle to slide me into a  kaleidoscope world of color, magic and canned laughter.

A most insipid theme song filled my head and I was suddenly trippin' through the white bread streets of Riverdale.  Pop's Chok'lit Shoppe loomed ahead, so I decided to peer inside.  There was Archie, the square-est square with a cloying modulated voice, sharing a malted with tomboy Betty.  Over by the jukebox was southern belle Veronica, with a super obnoxious squealing voice, dancing with the ultra smug Reggie.  Bursting out of the door, while eating a burger, was Jughead frantically running from the stalker-love of Big Ethel.
I followed them for a while, passing Harvey Kinkle as he abruptly left town, and was soon outside of a big, turn-of-the 20th century house.  I cautiously drew nearer and continued my peeping-john routine.  My mind reeled and my half-blind eyes bugged out.  I found them!  I found all of them witches and they were nothing like I expected.  Though I'm not sure what I was expecting.

Sabrina was there, looking like Sabrina with short blond, or maybe white hair held back with a headband. To perform magic, she tugged her ear like a less magical Carol Burnett or a drunk Samantha Stephens.  Then I got seriously confused when her Aunts appeared, partly because they were perpetuating harmful pointy-hat witch stereotypes.  Mainly because the Aunts were reverse from what I knew.  Hilda was the taller, severe one, while Zelda was the shorter, kinder one.  Oh, and Salem the cat wasn't black, which was surprising with all the other stereotypical witch stuff going on.

Just when I thought I was going to lose my jingle jangle high, Cousin Ambrose swished in to give this vanilla town some edge.  With his effeminate voice and mannerisms, Cousin Ambrose might be a part of the LGBTQIA community, though its never directly stated.  However, he looked quite natural and comfortable when he changed into a cheerleader skirt, so I was happy to find a connection in the hetero-norm landscape of Riverdale.

A loud, obnoxious commotion distracted me from Sabrina's house to a truly disturbing sight.  Had that old castle always been there or was my jingle jangle cut with some sugar sugar? There before me were painfully ridiculous versions of the Universal horror monsters called the Groovie Goolies.  They claimed to be Sabrina's cousins but I think they showed up in an attempt to get their own spin-off series.  I don't know if they succeeded but thankfully they disappeared after awhile.

As I felt the jingle jangle wearing off, I ran to the school dance to drink some of the obviously spiked punch.  Unfortunately, Principal Weatherbee and schoolmarm Miss Grundy had drained the bowl because they wanted to forget the crazy nonsense around them.  This totally bummed me out, but maybe it was for the best..  I would never want to forget the magical moment when Big Ethel called Sabrina a hussy.  As I waved a sobering farewell to this trip, I considered the possibility that Riverdale wasn't as straight-laced as I initially thought.

Now here I sit with a Saturday morning jingle jangle hangover, licking the bottom of the cereal bowl and typing these words.  Words to make sense of the senseless or the other way around.  Maybe the recent memories of Netflix's CHILLING ADVENTURES OF SABRINA altered my perception of this teenage witch.  I mean, that's why I fully expected Satan to appear when animated Sabrina angered a higher power, but was disappointed when it turned out to be simply the head witch.  I'm just relieved Josie and the Pussycats had already fled Riverdale to go on tour and stop villains from world domination because I would've hated to see them diminished in this particular cartoon universe.
In conclusion, I've learned that I should stick with series I have previously seen for my Saturday Morning Mid-Life Crisis and to severely research before ordering.  Don't get me wrong, there were good moments in this animated series of SABRINA THE TEENAGE WITCH, but they were very few and extremely far between.  In other words, watch at the risk of utter tedium.
(I just hope my next animated trip is really out of this world.

)
Thank you for reading or listening to my half-blind words.
Freak Out,
JLH
P.S. My Saturday Morning Mid-Life Crisis, so far...
CAPTAIN CAVEMAN AND THE TEEN ANGELS
THUNDARR THE BARBARIAN
JOSIE AND THE PUSSYCATS
~~~~~~~~~~~~~~
New Month!
New Eye!
New Interview!