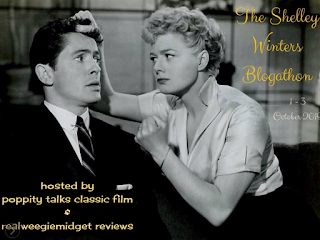 ~~~~~~~~~~~~
This is my contribution to THE SHELLEY WINTERS BLOGATHON.
Thank you to this blogathon's hosts...
Erica D. of Poppity Talks Classic Film
https://poppitytalksclassicfilm.wordpress.com/
and
Gill J. of Realweegiemidget Reviews.
https://weegiemidget.wordpress.com/
~~~~~~~~~~~~

"If you're an Eastman, you're not in the same boat with anyone."  - Alice Tripp

I could blog about how this film transformed me into an instant Montgomery Clift fan.  Seriously, I sat through a John Wayne film (Red River) just for Clift...and he was totally worth it!

I could blog about how this film slowly, and sometimes painfully caused Theodore Dreiser to become one of my favorite dead authors.  His 1925 literary masterpiece An American Tragedy is the source material for this cinematic masterpiece.

Perhaps another time, for I am here to blog about Shelley Winters.  If all you know about Miss Winters is her terrific and heartbreaking role in The Poseidon Adventure, then pull up a chair and allow me to introduce you to Alice Tripp.

Alice Tripp is a sweet, young factory worker.  She spends her days folding and boxing garments on an assembly line. She spends her nights alone in a room she is renting from a conservative landlady.  Her routine life is given a jolt when her employer's nephew arrives on the scene. 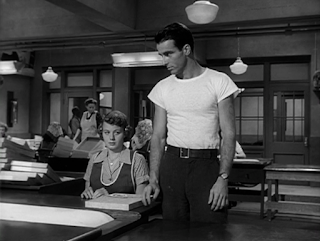 Alice is attracted to George Eastman, and he seems to return her feelings.  Going against company policy, they begin seeing each other outside of work.  This attraction grows until George and Alice succumb to their physical desire. 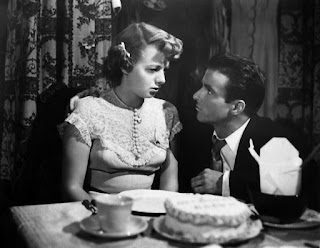 This desire leads Alice to discover she is pregnant.  The shocking news throws a wrench in George's social-climbing as he simultaneously woos a young socialite by the name of Angela Vickers.  There are decisions to be made.  Being an unwed pregnant woman in the 1950's, Alice has limited options.  Unfortunately for Alice, George Eastman is beginning to see her as an obstacle to his place in the sun. 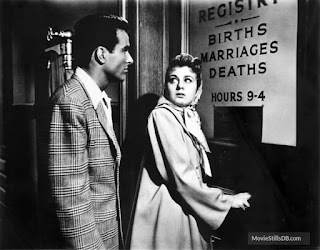 A PLACE IN THE SUN is an emotionally complicated film.  It's easy to root for Alice and George in the beginning, but it's even easier to get swept up in the romance between George and Angela.  Elizabeth Taylor as the perpetual breath of fresh air Angela Vickers, who knows nothing of Alice, makes that romance innocently beautiful and painfully tragic.  Montgomery Clift somehow makes George sympathetic despite the character being such a hot mess.  The pretty boys usually are. 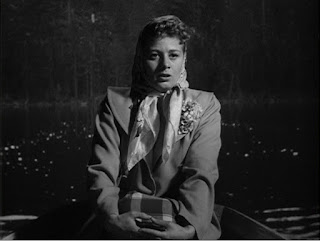 Shelley Winters, who was not an ordinary woman, had the monumental task of portraying a lonely, plain, naive, ordinary young woman.  Alice could even be seen as dull and withdrawn, at least compared to Angela.  Through her mesmerizing talent, Ms. Winters manages to make Alice Tripp a complex and sympathetic character.  It's utterly heartbreaking to watch Alice developing feelings for George while simultaneously losing him, and that heartbreak is because of Shelley Winters' nuanced performance.

So sit back, imagine a loon calling in the distance and enjoy the incomparable Shelly Winters in A PLACE IN THE SUN.