In the fateful year of 2006, I discovered my serious, without a hint of irony, appreciation for crooner Perry Como.  It's a complicated tale spanning decades that perhaps I'll write about one day.

A year later my sister forced me to watch an episode of Biography about Barry Manilow.  I must admit that I felt something akin to respect for the singer, especially after hearing how his career started in bathhouses.  During this hour long program, Barry Manilow discussed 2:00 AM PARADISE CAFÉ with great enthusiasm, and I knew I had to listen to that album.

THE DISC
I push play and close my eyes.  In that silent moment before the speakers spring to life, I am transported there.  Outside a light rain is coating the pavement with a damp sheen.  The neon sign hums the promise of shelter from wetness and the agitating world.
Entering the drowsy, hazy atmosphere, I am immediately drawn to the respectable piano in the corner.  As I sit at a small table within close proximity, the player announces in a soothing voice that it is 2:00 AM and he only has one hour left.  A reminder to put any requests in now.
But that's not how this late-hour crowd burns.  The spattering of patrons on any given night totals four to six, including myself.  We absorb what music is offered to us and nurse our drinks within that hour.  The waitress knows what I like: a cola with a shot of vanilla.
She brings it to my table as the man behind the ivories caresses them like a former lover returned.  Before the piano man’s voice begins its sweet aching, a sax man beside him sprinkles his baritone notes, completing the sway this music holds.
I gaze about the smoky surroundings.  Nameless faces flicker in the candlelight, all with a story of loss...regret.  That's why we are in the Paradise Café at this obscene hour.  Finding comfort within the mellow music.  Fighting the blues with blues.
Time passes and before I know it last-call is called.  As the piano man plays me back to reality, I wonder what it is that drew me here and where I will go after.
Perry may have been my gateway drug to a softer, easy-listening side...but this?  Is this disc the beginning of Barry or a crossover to slow jazzy blues?  I can't begin to guess, but I know for certain I will continue to visit 2:00 AM PARADISE CAFÉ and its refreshing melancholy.
10/16/2007 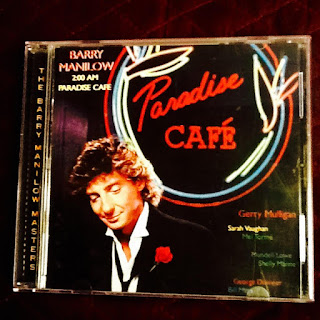 For the record, this disc did not start me down the road of Manilow.  I appreciate a few of his other songs, especially "Daybreak" because of its brilliant use in SERIAL MOM, but another entire Manilow album has never set my soul on fire like Paradise Café.  No, not even that apartment themed one.  (Sorry, G B-D.)  However, I have since found myself, depending on my mood, drawn to blues and jazz when I stream music.

P.S. To read another post about another disc, please click...Garbage.